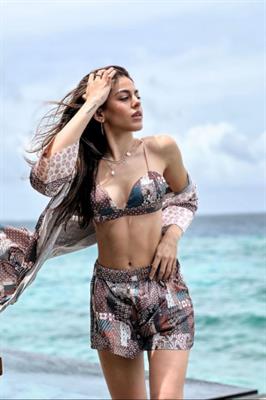 Alaya F is one of the most popular actresses in the generation Z today. Not only is she popular for her spectacular dressing sense, and event appearances, but also for her engaging social media presence. The actress often shares her video reels full of Yoga exercises, dance choreography, and DIY art.
The diva is living the dream as she holidays in the Maldives wearing a stunning bikini set. She added a shrug to her beach look by flaunting in an exotic pose. She looks like a fiery bomb in this picture dazzling in the perfect mood . Seems like the actress is having a blast holidaying in Maldives.
She took her Instagram writing “ Feelin’ like Jaadu enjoying the Maldivian Dhoop 🌞 @hiltonmaldives Style by @sanamratansi #amingiristory #Hiltonmaldives.

Meanwhile, on the work front, Alaya F has an interesting lineup of films which includes U-Turn with Ekta Kapoor, Freddy with Kartik Aaryan, and more unannounced projects.