The musical is witnessing full-shows and attendance from many B-town celebs including Soha Ali Khan, Neha Dhupia, amongst others 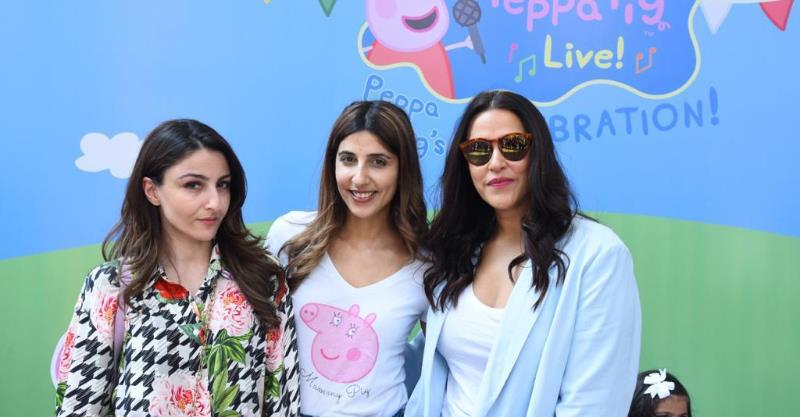 Peppa Pig has been reigning over the hearts of kids globally over the years and continues to keep them spellbound. As the live musical version of the iconic character opened in the city last weekend with Peppa Pig Live, kids in Mumbai were seen oinking watching their cheeky little piggy friend and her family! The eventful day full of dance, music, and limitless fun with Peppa, George, Mummy Pig and Daddy Pig kickstarted on a high note with kids beaming with excitement watching their favourite toons put on a show for them.
The theatrical affair saw all kids and adults watch with wide-eyed wonder as the pig family performed live on stage. Post the musical, the kids were all amped up to spend a few moments with Peppa and her family as they all frolicked in fun and posed for photos. The evening was quite a star-studded affair with crème de la crème of Bollywood and the entertainment industry such Soha Ali Khan, Neha Dhupia, amongst others gracing the first day.
Commenting on the Peppa Pig Live, Soha Ali Khan shares, “Inaaya’s favourite toon is Peppa Pig! In fact, there is not even a day that goes by without her watching Peppa, to the extent that we also enjoy it as a family. Peppa just doesn’t offer entertainment for kids but also imbibes values in them. Which is why we couldn’t have missed this musical! Inaaya had so much fun watching it with her friends.”
Neha Dhupia said, "Watching Peppa pig live today was super exciting...what gave us even more joy was watching our little ones cheer and groove along. We all had a great afternoon … bing bong boo!"
Produced by Viacom18 LIVE and BookMyShow LIVE, this is the second season of the musical extravaganza where every child’s favourite characters come to life in the play. The Peppa Pig Live Musical made its debut in 2019 in India touring 8 cities and doing 78 shows and was a star-studded affair.
And next on the tour is Peppa Pig and her family spreading their charm with the kids in Bangalore next week, followed by Chandigarh, Delhi and a few more cities, soon!

Tickets are exclusively on the BookMyShow app/website and are sold out very quick!
Tags : soha ali khan Neha Dhupia