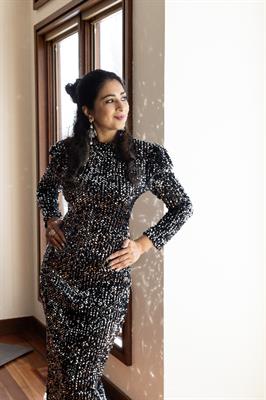 The 30th of June 2022 saw the Times 40 Under 40 Achievers Award ceremony at The Westin Gurgaon.
Times 40 Under 40 Achievers Award 2022 honoured and applauded 40 of the brightest corporate leaders, emerging entrepreneurs, artists, sportspersons, musicians and business professionals across North India under 40.
Anjali Phougat, an Indian-American fashion designer, is one of the well-known names on the list of 2022 recipients of the Times 40 Under 40 Achievers Award. Anjali Phougat has accomplished everything, from winning an Indian beauty pageant to founding a luxury fashion company in the US. She is an illustration of the kind of youthful, imaginative leader who is willing to go above and beyond in order to remake business and society. Anjali Phougat received the Times Under 40 Achievers Award, North 2022, for Emerging Women Entrepreneurs in Fashion.
Popular Bollywood actor Sonu Sood presented her with the award and congratulated her on her accomplishments and ability to motivate today's youth. Sonu Sood, an actor, is also a producer of films, a model, a humanitarian, and a philanthropist. He received praise for his generosity throughout the pandemic and was recognised as a real-life hero in India. Anjali Phougat, the designer, was overjoyed to receive such recognition from the Times, and she was even more thrilled to receive the award from sonu Sood, a real-life hero who is well-liked all over the world.
Anjali phougat pledges to continues with her efforts making India proud worldwide .
About Anjali Phougat
Anjali Pougat, has always enjoyed fashion design and began sketching her design when she was 16 years old. She has since produced bespoke ensembles that have won the hearts of people all around the world. Her career in the fashion world began when she won the Miss Haryana title in 2006, and she hasn't looked back since. Her accomplishments have been a source of great pride for her country and family over the years. She is currently the CEO of Designer Dream Collection, a South Asian luxury business, as well as a social rights campaigner.
Anjali's work is favoured by a number of high-profile celebrities. Harnaaz, the winner of the Miss Universe Pageant in 2021, had her jewellery and various dresses designed by her.
• Anjali’s work is the first choice for several to top celebrities. She also designed jewelry and several outfits for the 2021 Miss Universe Pageant Title Holder Harnaaz Kaur Sandhu, and she proudly wore DDC designs during her homecoming in India, USA, Indonesia, and Philippines. Anjali’s outfits were also showcased on the 2021 and 2022 Cannes Film Festival red carpet and New York Fashion Week shows. She has associated & worked with many Bollywood and Hollywood celebrities including Sonu Nigam, Priyanka Chopra’s sister Mannara Chopra, Zeenat Aman, Ashmit Patel, Shakti Kapoor and many more.
• Anjali Phougat’s brand Designer dream collection is honored to be one of the top designers in Dress & Attire in New Albany on WeddingWire in 2022 . Also ,14th Annual Couples’ Choice Awards Honor  DDC the Top Wedding Designers Nationwide and Abroad
• Being a woman of color, Anjali understands what it is like to be discriminated against. Therefore, she pledged to promote inclusivity and acceptance of all people from all walks of life through her business. She deeply respects the LGBTQIA+ community, making her business a safe space for all.
• Passionate about craft, Anjali strives to make a name for herself worldwide. Some of her latest achievements include producing a short film that was screened at the Cannes global short Film Festival 2021. The film Inclusion through Unity touched on important topics, such as gender inequality and LGBTQIA+ rights. Her film also received an award at the Global Short Film Awards for Best Short Film.
• Quite recently, Anjali launched her new bridal collection and supported a great cause to save soil by Sadguru in her fashion show and Bollywood star Ashmit Patel joined hands with her and wore save soil clothing to support the event organized by Anjali Phougat to save the mother earth.
Despite her many achievements, she believes that there is a lot that she needs to do to give back to the world. She hopes that she is recognized for all her efforts, so she can continue to work with the same enthusiasm for her people.
Tags : Anjali Phougat