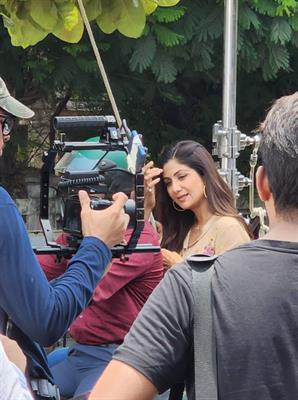 Bollywood’s leading superstar Shilpa Shetty has been omnipresent across platforms! The recent announcement of Shilpa Shetty becoming the first actress to enter Rohit Shetty’s cop universe has her fans abuzz! And sure enough, the teaser video had Shilpa Shetty on fire in her OTT debut venture, Indian Police Force.
Now, it’s her leaked pictures from the sets of Sukhee in Mumbai that are doing the rounds of the internet. It sure looks like the netizens have voted and Shilpa is one of their most favourite Bollywood superstars!
Her leaked pictures from the sets of her upcoming film, Sukhee, in Mumbai as she rides pillion on a bike in blue jeans and a beige top. Working hard on Sukhee, this is the second time that her pictures from the film have taken the internet by storm. She will be seen in and as Sukhee, a Sonal Joshi directorial, co-produced by Abundantia Entertainment and T-Series.

Meanwhile, Shilpa Shetty just wrapped up India’s Got Talent, the country’s most popular talent-based reality show on television. Her radio show, ‘Shape Of You’, has become one of the most loved radio chat shows and her pipeline has projects like Nikamma, Sukhee and Indian Police Force on the horizon.