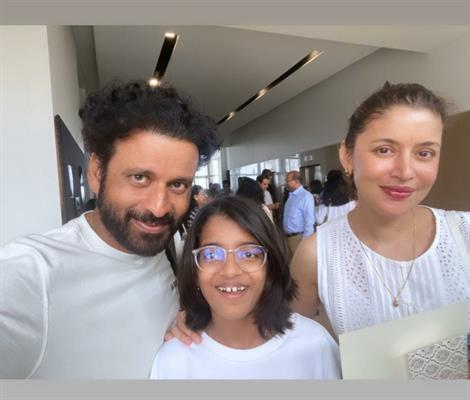 Three Times National awards and honoured with India's fourth-highest civilian honor Padma Shri winning actor Manoj Bajpayee will be off to the USA for a month after completing 5 projects in June and before his starts another slate of films will take a month break after finishing Devashish Makhija's JORAM which is in the last leg of the schedule to spend some quality time with his family.
The finest actor Manoj who has several movies lined up for himself through the year, has now decided to take some time off from his busy schedule for a month and instead spend time with his wife Shabana & daughter, Ava Nayla & usually ensures that his daughter gets to spend her summer vacations with daddy dearest.
The actor believes that a father and daughter relationship is a very special one and in spite of his erratic schedules, it is his priority to spend time with his family
Meanwhile, Manoj has several projects in the pipeline including the thriller drama Joram, directed by Devashish Makhija, Gulmohar by Rahul chittella co starring Sharmila Tagore Amol Palekar, RSVP's Despatch directed by Kanu Behl, Abhishek Chaubeys’s film with Konkana Sen, Sayaji Shinde,Naseer sir. He also lend his voice to Dr Destiny's character for the Hindi version of The Sandman.
Tags : Manoj Bajpayee