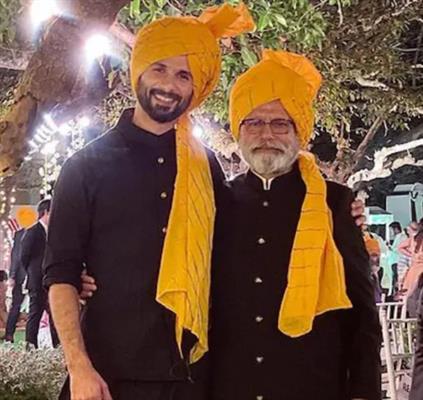 Pankaj Kapur is an Indian actor who has worked in Hindi theatre, television and films. He has appeared in several television serials and films. Yesterday Pankaj Kapur celebrated his birthday. His son and actor Shahid Kapoor and his wife Mira Rajput took to Instagram to wish him on the occasion.
Shahid Kapoor shared a beautiful photo with dad Pankaj Kapur from half-sister, Sanah Kapoor’s wedding. He twinned with his father in black bandhgala outfits, white lowers and marigold yellow turbans. Shahid, wishing Pankaj Kapur on May 29, penned a late-night birthday wish for his father. Sharing the photo, he wrote, “Happy birthday dad (sic).”
Check out the photo below.