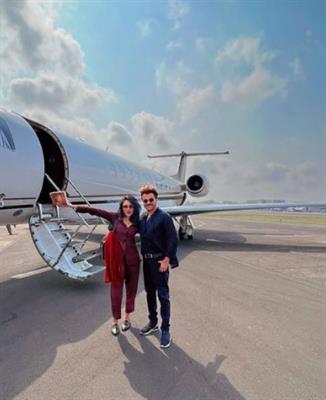 The buzz in the town is hovering around, that Sobhita Dhulipala has completed the shoot of 'Made In Heaven' season 2, that the audience has been eagerly waiting for. However, the actress doesn't seem to calm down on her enthusiasm to deliver more of her spectacular performances as she is constantly traveling places for her upcoming projects.
Sobhita Dhulipala was recently spotted at the airport along with Anil Kapoor. According to the reports, they are said to be working together on a project titled 'A Night Manager'. While Sobhita wore a gorgeous comfy shirt and pants, Anil Kapoor conquers the heat in the summer with his black kurta on black jeans. Their look definitely defines the pairing as the combination of a 'Beauty and the beast'.
This might be happening for the first time that the audience will get to see these two phenomenal talents together on the screen. Bollywood has been surprising the audience by casting such a brilliant combination of actors in the films.
On the film front, Sobhita’s envious lineup of projects includes Ronnie Screwvala’s ‘Sitara’, Mani Ratnam’s magnum opus ‘Ponniyin Selvan’ (Tamil), Telugu film ‘Major’ with Adivi Sesh, a Hollywood project ‘Monkey Man’ directed by and starring Dev Patel and her much-awaited web series 'Made In Heaven' season 2.