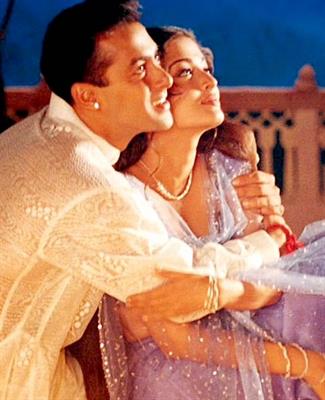 Hum Dil De Chuke Sanam is a 1999 Indian Hindi-language romantic drama musical film directed by Sanjay Leela Bhansali. It was released internationally as Straight From the Heart.
The film stars Salman Khan, Ajay Devgn, and Aishwarya Rai. Based on Rashtriyashayar Jhaverchand Meghani's play Shetal ne Kathe, the film narrates the story of a newlywed man who discovers that his wife is in love with another man, and decides to unite them.
The film has been described as a loose adaptation of Maitreyi Devi's Bengali novel Na Hanyate, although the film itself does not credit it as a source. It was filmed throughout the Gujarat-Rajasthan border region, in addition to Budapest, Hungary, which was used to represent Italy.
The film premiered in the Indian Panorama section at the 1999 International Film Festival of India.The Bengali film Neel Akasher Chandni was inspired by this movie.
Today the film completes 23 years and the songs are still famous and memorable ones.