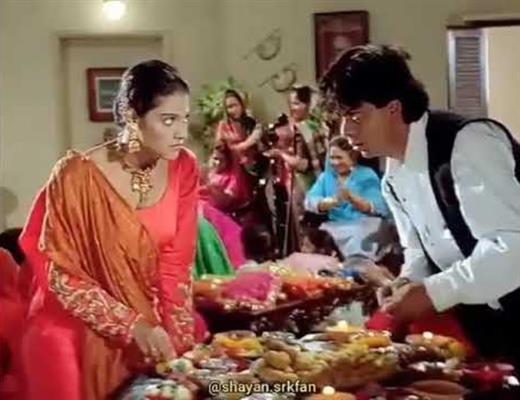 Karwa Chauth, by our Hindi film industry in its unique and beautiful ways is something that viewers always look forward to. Karwa Chauth is a fasting festival that Hindu women observe for the health, love, and longevity of their husbands and marriage.
From a subtle romance between Salman Khan and Aishwarya Rai Bachchan in Hum Dil De Chuke Sanam to the heartening long-distance Karwa Chauth between Amitabh Bachchan and Hema Malini in Baghban.
Bollywood portrayed Karwa Chauth is its raw form and full glory. Find below a list of more such Bollywood movies that celebrate this fasting festival of Karwa Chauth.
In 1994 came the movie Hum Aapke Hain Koun.. which won the hearts of critics and audiences alike. The iconic duo of Salman Khan and Madhuri Dixit was at its peak during the 90s and never once failed in spreading their absolutely magical and charming chemistry. The director perfectly portrays the festival of Karva Chauth with the song Maye ni Maye, adding more enthusiasm to the overall concept.

In Baghban the Karva Chauth scene, which became heavier with piercing emotions, with Amitabh Bachchan singing Mai Yaha Tu Waha (oh, my heart). With this movie, Bollywood gave a fresh perspective to the old-age Karwa Chauth ritual by showcasing a husband also observing fast for his wife.

In 1995 came the movie Dilwale Dulhania Le Jayenge, and it literally won massive hearts, especially from the youngsters then. It was every bit the immense love Simran had for Raj. Simran observed Karva Chauth vrat and pretended to faint in front of her family and Shah Rukh Khan, making them feel as if she collapsed due to weakness. She did this only to drink water from the hands of her Raj to break her fast.

In Ishq Vishq wherein a strong friendship turned into love is the whole essence, highlighting a sizzling chemistry between Amrita Rao and Shahid Kapoor. Amrita Rao observes the Karva Chauth fast Shahid Kapoor, her boyfriend, wholeheartedly and beautifully. She follows each and every ritual of this fasting festival dedicatedly and with love.