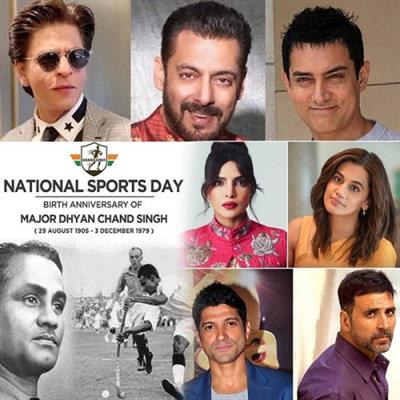 Today is National Sports Day in India. Today is the one hundred and seventeen birth anniversary of the world’s greatest hockey player – the proud of Indian hockey forever Major Dhyan Chand.

The Indian government gives Major Dhyan Chand Award - the highest award for lifetime achievement in sports and games in India, and celebrates the National Sports Day today on his birthday.

And our great Bollywood actors who have acted in –great movies on hockey and other sports like – Chak De ( Shah Rukh Khan), Bhaag Milkha Bhaag ( Farhan Akhtar), Mary Kom ( Priyanka Chopra), Dangal (Aamir Khan), Sultan (Salman Khan), Gold (Akshay Kumar). Soorma (Diljit Dosanjh), Shabaash Mithu and Rashmi Rocket (Tapsee Pannu), Saina (Parineeti Chopra ) if we take cricket than 83 (Ranveer Singh).. the list will go on but you won’t find any post on social media at least (till the filing of this write up) by these top Bollywood celebrities – the superstars who are considered to be idols.

May be no sports or hockey movie is on cards for the Khan trinity and other top Bollywood actors mentioned above.

So nationalism, love for sports only when your movie is about to release. What fakery and hypocrisy. What message are you sending you Bollywood celebs.

And what else can you expect from this mera airport look, this look, that look and agenda driven gate keepers of Bollywood.

So disappointing and such a spoil sport this celebs are…

Even Amitabh Bachchan and Ajay Devgn have not posted anything on National Sports Day. 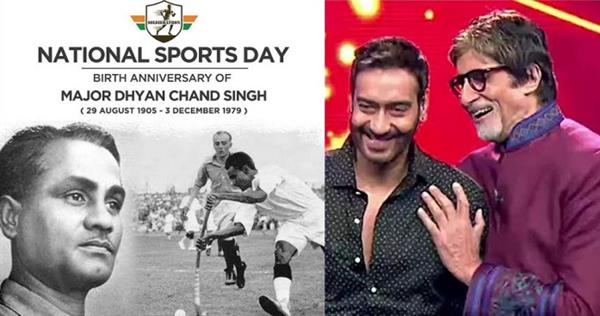 Even celebs that are considered to be nationalist and pro BJP like Ajay Devgn has also not posted anything on National Sports Day.

It must be reminded that Ajay Devgan’s upcoming movie

Maidaan is a biographical sports film based on the golden era of Indian football.

Amitabh Bachchan – the icon for the icons who gave all gyan (knowledge) on upliftment and empowerment through sports in Jhund is also silent.

But sir, what about our Indian national sports – Hockey and the great Major Dhyan Chand…

Agreed a celebrity, an actor is an actor but since you guys have acted in movies related with sports and hockey kuch toh sportsmanship dikhao.