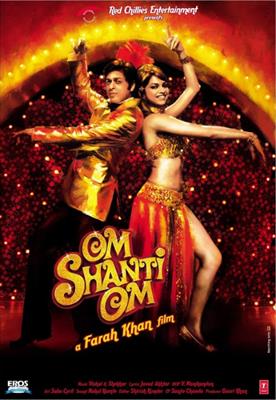 Om Shanti Om is one of those finest moments of an Indian cine goer at theatre. The 2007 Indian Hindi-language romantic fantasy comedy film written and directed by Farah Khan and co-written by Mayur Puri and Mushtaq Shiekh starred Shah Rukh Khan as Om Prakash "Omi" Makhija and Om Kapoor aka O. K.

Om Shanti Om showed Farah Khan’s unparallel love for the Manmohan Desai and grand masala entertainers. The movie had tribute to many films from the retro era like the story line based on reincarnation was similar to Karz, Madhumati and the movie in its due course had lot of inferences from the legendary movies and filmmakers.

Here we are more awed with this small clip which explains the degree of passion for retro in filmmakers like Farah Khan and the greatness of Bollywod escapist masala and the popularity of stardom the craze for on screen stars.

While talking to Shanti Priya’s poster he makes that signature Rajesh Khanna move with hands.

When Kirron Kher who plays Om mother grumbles about her lost opportunity to meet K. Asif and her possible chances of bagging the role of Anarkali done by Madhubala in K Asif’s all time magnificient cult opus masterpiece Mughal E Azam starring Dilip Kumar and Madhulbala.