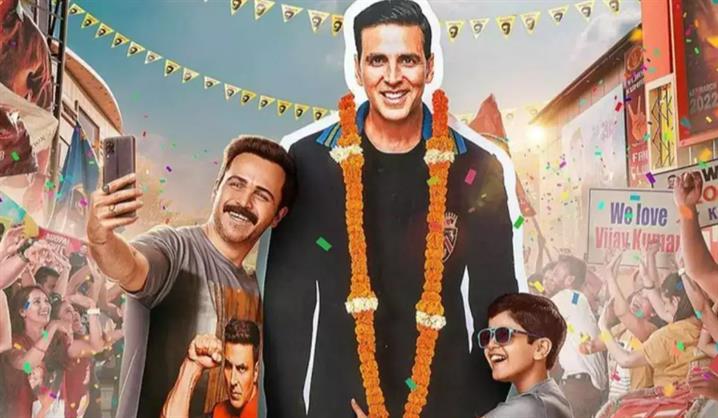 Finally, the trailer of the much awaited Akshay Kumar and Emraan Hashmi's upcoming entertainer Selfiee was unveiled by the makers just now in Mumbai.

Also starring Diana Penty and Nushrrat Bharuccha, Selfiee directed by Raj Mehta is set to release in theatres on February 24, 2022.

Selfiee trailer – major highlights, things that work in favour – the plus points

Akshay Kumar and Emraan Hashmi are coming together for the first time. Their combo is ‘fan’tastic and when they come at logger heads, it will be a treat for the fans and the audience in general. Both are in their elements.

There might be some tiny similarity between SRK Fan and Robert De Niro’s The Fan in the premise ‘ the story of a superstar and his superfan."  but the part and parcel of stardom and the dangers of fan worship in Selfiee gets an emotional and thrilling turn which will keep the audience guessing and engaged.

Akshay Kumar plays the role of a film personality while Emraan is seen as his diehard fan.

The trailer is finely cut and avoids any romance, it sticks to the point and maintains the curiosity level. Though the story gets revealed but that in this case comes as a blessing in disguise. The bang on beginning with Akshay Kumar’s action scenes and then we get to know about his character and then cut to Emraan's character - a middle-class cop and a father – crazy about his silver screen idol – Vijay (Akshay Kumar) who would do anything to fulfil his and his son's dream of taking a picture with Vijay.

Selfiee is not an original idea, it’s a remake of the Malyalam-language film Driving License, which starred South stars Prithviraj and Suraj Venjaramoodu in the lead roles.

Naysayers will target the movie by this point. Otherwise as far as commercial cinema is concerned there is nothing that objectionable in the Bollywood remake of Malyalam-language film Driving License that threatens to hamper its prospects

From the trailer Selfiee seems to be a winner without any doubt, guaranteed hit ( if the momentum seen in the trailer is maintained).

Now whether it will be a super hit or blockbuster that depends on the movie.

Selfie is directed by Raj Mehta. The movie is a remake of the Malyalam-language film Driving License, which starred South stars Prithviraj and Suraj Venjaramoodu in the lead roles.

The official Hindi adaption is bankrolled by Karan Johar, Hiroo Yash Johar, Prithviraj Sukumaran and late Arun Bhatia among others.

Selfiee is slated to release in the theatres on February 24, 2023.