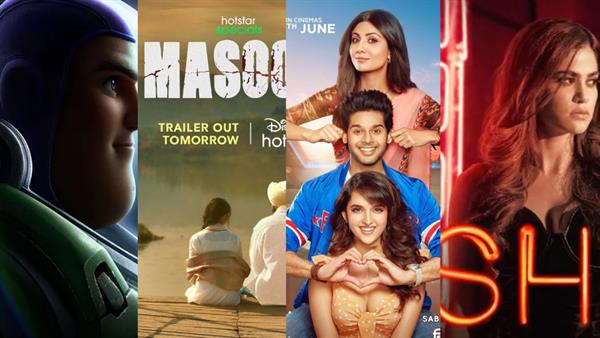 Cineblues begins its weekly edition of releases this week in theatres and OTT.

Here are the top movies/series in various genres that can be explored this week.

Created by Imtiaz Ali and directed by his brother Arif Ali, SHE had won rave reviews in the OTT space in 2020. The protagonist Bhumi, played by Aaditi Pohankar, treads the dangerous line between taking the side of the police or the the drug lord Nayak, while exploring her new found sexual liberation. The second season of SHE promises to be a rousing and intriguing saga.

Written and created by Pushkar and Gayatri, the investigation procedural stars Kathir, Aishwarya Rajesh,Sriya Reddy and Radhakrishnan Parthiban in pivotal roles.With a world wide premiere in over 30 Indian and foreign languages, this Tamil original series has generated massive anticipation. Sriya plays a cop named Regina in this intense crime thriller that's shot in Ooty. She is teamed with Kathir who plays inspector Sakkarai. Directed by Brahma and Anucharam.M., this eight episode series will stream on Amazon Prime from 17th June 2022.

Urban dysfunctional families are perpetual hot selling themes that the OTT arena has been enamoured with. And the upcoming Salt City, helmed by Applause Entertainment and Sunshine Productions, and directed by a trio of Rishabh Sahai, Shashank Kunwar and Pranjal Saxena explores the evolving complexities within the Bajpai family. Salt City boasts of an enviable starcast that comprises Piyush Mishra, Gauhar Khan, Esha Chopra, Dibyendu Bhattacharya, Jitin Gulati and Manish Anand. It will stream on Sony LIV from 16th June 2022.

Abhimanyu Dassani stars in this commercial action-comedy directed by Sabbir Khan along with Shirley Setia. The film is a remake of a Telugu hit Middle Class Abbayi and marks Shilpa Shetty’s comeback to bigscreen almost after 15 years. She has an interesting and meaty role in the film and the trailers are a testimony to that.Dassani exhibited promise in Mard ko Dard nahin hota and the Netflix caper Meenakshi Sundareshan. He is pitted against his namesake Abhimanyu Singh who plays the antagonist here.Nikamma releases in theatres on 17th June 2022.

Boman Irani is set to make his digital series debut in this Mihir Desai directorial, adapted from the acclaimed Irish series, Blood.

Masoom is a daughter’s quest to unearth the truth, who can she trust when her family wishes to hide the truth under the garb of love and protection? Set in Falauli, Punjab, the series will unfold the unspoken truths that cloud the lives of the Kapoor family, where complex relationship dynamics change with time and ambition. The six-episode series, releasing on 17th June, On Disney+ Hotstar will see the digital series debut of the indelibly talented actor Boman Irani and rising star Samara Tijori showing another side of the coin of a complex father-daughter relationship.

Joining the lead cast will be Manjari Fadnis, Veer Rajwant Singh, Upasana Singh, and Manurishi Chaddha, amongst others.

In this Walt Disney and Pixar’s film, Lightyear embarks on an intergalactic adventure with a group of ambitious recruits and his robot companion. With a voiceover by Chris Evans, this splashy sci-fi extravaganza, directed by Angus MacLane, promises dollops of excitement and thrills.

‘Bandon Mein Tha Dum’ sheds light on the trials and tribulations that the Indian cricket team had to navigate ahead of their unforgettable victory against Team Australia at their home ground of Gabba, where they hadn’t lost a Test match for 32 years.

Coupled with a powerful script, behind-the-scenes footage, candid narratives from the winning squad like Ajinkya Rahane, Ravichandran Ashwin, Cheteshwar Pujara, Mohammad Siraj, Rishabh Pant and Hanuma Vihari, their coaches, as well as journalists who covered the series, The web-series focuses on how the team played extraordinarily high-quality cricket and simultaneously redefined the concept of hard work, perseverance, determination, and commitment, setting the highest standards of sportsmanship while breathing new life into the fading format of Test cricket!

The show is now streaming on Voot Select.