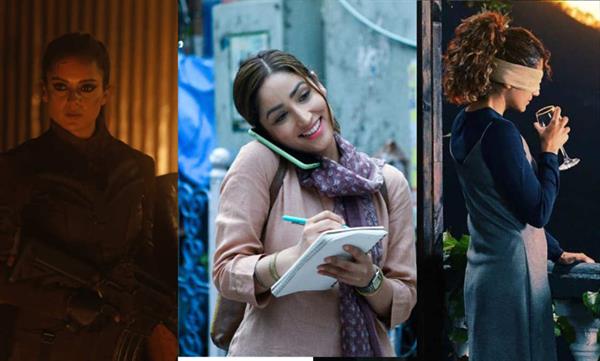 From Taapsee Pannu's Blurr to Rani Mukerjee's Mrs Chatterjee Vs Noraway; Zee Studios has an impressive lineup of female led films.
It is truly a great time for female entertainers to be in the industry as the focus lies heavily on movies about women. As they take the center space in every arena of Bollywood, there are a bunch of promising female led films that Zee Studios will be presenting before the audiences in the year to come. The mix of films, as well as performers is one that is ideal on paper and even better when put together, the kind that speaks for itself.
As the audiences gear up to visit theatres, here is a quick list of some movies by Zee Studios that see women taking the center stage, and therefore, making them a must watch:
Lost with Yami Gautam
An investigative drama, Lost is directed by Aniruddha Roy Chowdhury and is backed by Zee Studios along with Namah Pictures. It will explore multiple themes of commitmment, responsibility, among others and have a social context to the story. A promising emotional thriller, the movie is slated for a release sometime this year.
Blurr with Taapsee Pannu
Helmed by Ajay Bahl, the film is the story of a woman losing sight while she is working on an investigating the death of her twin sister. With a gripping plotline and Taapsee at the center, this one is promising.
Mrs Chatterjee Vs Noraway with Rani Mukerji
Written and directed by Ashima Chibber, the film narrates the true story of an Indian couple whose children were taken away by the Norweigian welfare services. An intriguing premise and Rani in the key role, the movie is one of the much awaited films by Zee Studios.
Dhaakad by Kangana Ranaut
With Kangana in the lead, the movie is directed by Razneesh Ghai, and is the story of a deadly field agent, Avni, who is given the responisbiliy to gather intel and hence, get rid of Rudraveer, an international human and arms trafficker who has been off the radar for a decade. The movie also features Arjun Rampal, Divya Dutta, Sharib Hashmi, among others.
Janhit Mein Jaari with Nushrratt Bharucha
Scheduled for a June 10, 2022 release, the movie is rected by Jai Basantu Singh. Along with Nushrratt, it also stars Anud Dhaka, Vijay Raaz, and Pratiosh Tripathi in key roles. The film is narrates the tale of a young firl who is trying to create a change and hence, takes up the job of selling condoms in a small town of MP. During its narration, the film tries to speak of the social taboos, family resistance and other hurdles that she has to deal with.
Om: The Battle Within with Sanjana Sanghi
Directed by Kapil Verma, the movie is slated for a release on July 1, 2022. A power packed action drama, the movie looks promising and sees Sanjana Sanghi in a completely different avatar, which is truly every reason to add to the fans' excitement.
Which of these movies are you most excited for?
Tags : Taapsee Pannu Rani Mukerjee Zee Studios