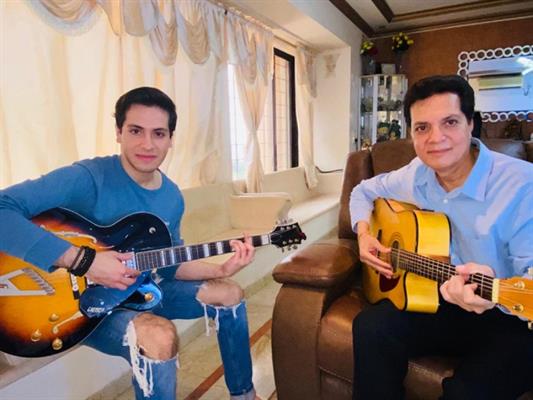 Woah, we're half way there, Woah, livin' on a prayer… remember Bon Jovi’s chartbuster released in 1986?!, well the father son music duo Jatin Pandit and Raahul Pandit have made an appeal to god to save us from the deadly Corona Covid 19 scare. Yes, we are half way through its unlock phase 1 and the father son duo Jatin Pandit and Raahul Pandit speak about their song to god Prabhu Hum Ko Shama Kar. How the song flashed into the mind of Jatin Pandit (yes – the strings behind the mesmerizing songs of Jo Jeeta Wohi Sikander, Dilwale Dulhania Le Jayenge, Gangster, Khamoshi, Yes Boss, Kuch Kuch Hota Hai, Sarfarosh, Mohabbatein, Kabhi Khushi Kabhie Gham, Chalte Chalte, Fanaa, Dabang – the list goes on) and how did his son Raahul Jatin shaped it into a heartfelt plea.

Taking time out and pertinently following the lockdown guidelines, the father son duo Jatin Pandit and Raahul Jatin speak from heart about their prayer to god, the corona effect, hope and more…

The idea behind the song?

Jatin Pandit: Idea behind this song is to spread awareness and to ask forgiveness for our sins from God which will help us fight this Pandemic. Somewhere I feel that nature has revolted and humanity is facing its Karma- this is the only idea behind this song.

How did you manage to compose, shoot the song?

Jatin Pandit: I was trying to make a romantic song and was looking for romantic lyrics, but due to the current circumstances, I couldn't think of any, and just in the flow of this sadness the song was made. It is a trying time, there is so much suffering everywhere, I just could not think of romance. The emotion that was driving me was deep anguish and that is what has come out through the song. Once the song was ready, my wife said lets shoot it. We shot it on the terrace. My son edited it using stock shots and that is how Prabhu Hum Ko Shama Kar was made.

Music is in your blood, how easy and difficult was it for you to compose & shoot?

Jatin Pandit: Yes, you are right music is in our blood but shooting the song was a challenge, as there is lock down this song is shot on our terrace and the idea of terrace worked a lot as we got to capture a very beautiful view. I would like to appreciate the effort done by my son, Raahul and my wife. The song was shot and then edited by him. I would have composed it and kept it to myself, not done anything about it. They believed that this should be shared with everyone as it will help people to ease their pain.

On Raahul Jatin coming into the scene?

Jatin Pandit : While I was composing the song, he came and asked me to sing it, cause the door was open and he could hear the music. He loved the song and said it sounds 'Divine'. This word attracted me a lot, then I went to complete it, he made me aware that this should be shared with everyone, and asks forgiveness for our sins from the lord. Raahul got into this, programmed and produced this song, planned and executed the shoot also.

Raahul Jatin: I think it is a great song. I heard the song and felt it should be shared with everyone. Its very calming and spiritual- something that the world needs the most this moment. I got onto the production part of it – recording and singing it with my dad. I planned the shoot and it all fell in place. We created the song to comfort people and genuinely offer our prayers.

You could have got some known singers like Kumar Shanu, Udit Narayan  Alka Yagnik etc with whom you have worked to come that would have spread the awareness to another level?, why they are not seen?

Jatin Pandit : This song is not recorded to earn fame, I could have roped in the other big singers too and made the song but, for me this song is a prayer to the God to help us in this situation and I believe that prayer should be done with family. Although every singer out there is my family, if in future we plan to make another version we can think for other singers but right now its prayer for me which I am offering to God with my family.

How are you coping with the corona pandemic and lock-down?

Jatin Pandit : As we all are at home so I have started completing my pending work, like I’m completing the script which I started and also started Yoga apart from these I help my wife in some household chores too. Making music is something that goes on as well by default.

Raahul Jatin: Just stay home. That's the simplest and the most effective way to prevent you from getting it and not letting it spread.

Has the lockdown given you more time for riaaz, understanding music etc?

Jatin Pandit : Yes now a days I sit a lot to make some good music and I work on songs, write some of it. I would say there are fewer distractions so we are all getting more time - be it work or spending quality time with family. Sometimes I even try to call my friends who I don’t get to speak with otherwise in my routine life.  So yes, I’m enjoying this time by doing things which I used to miss.

When and where do you see hope?

Raahul Jatin : Where there is life- there is hope. Yes, people are dying, falling sick the world has come to a standstill but we are all fighting it together and I’m sure we will overcome this. Science is developing every day, Government is trying to do its best- people are invested in this and so much of effort can’t go a waste.

Finally, what makes this song special?

Raahul Jatin : I think what makes this so special is this it is a very honest and genuine sort of heartfelt attempt by my dad and me to make something that truly helps people to calm down and turn to god for strength.  It is a very genuine song. That's what I would say is special about it.

Penned and composed by ace music director Jatin Pandit, Prabhu Hum Ko Shama Kar music is produced by Raahul and it is sung by both Jatin and Raahul.

Prabhu Hum Ko Shama Kar is penned and composed by ace music director Jatin Pandit, music is produced by Raahul and it is sung by both Jatin and Raahul.