Crime, Thrills and Bodies pile up in the weekend in your favour 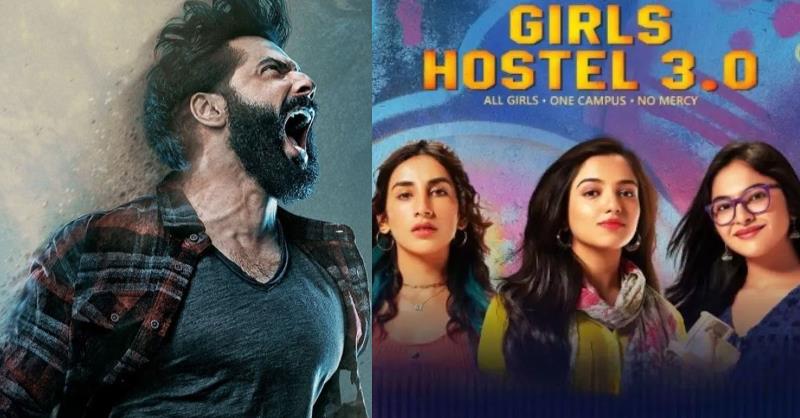 This week on Friday i.e 25th November 2022 we have the list of movies and series to be released.

BHEDIYA ( Genre : Comedy, Thriller | Duration : 2 Hour 36 mins | Language : Hindi) :
Set in the mesmerising forests of Arunachal, Bhediya tells the story of Bhaskar(Varun Dhawan), a man who gets bitten by a mythical wolf, and begins to transform into the creature himself. As Bhaskar and his ragtag buddies(Kriti Sanon, Abhishek Banrerjee) try to find answers, a bunch of twists, turns and laughs ensue. Bhediya is made under the Maddock Films banner (Dinesh Vijan) and directed by Amar Kaushik. Sachin Jigar has composed the music to the lyrics by Amitabh Bhattacharya.Releases in Theatres.

A group of affluent teenagers decide to party in a remote mansion during a hurricane. However, things take a sinister turn when a fun party game goes wrong.The film is directed by Halina Reijn. Releases in theatres.

( Genre : Crime, Action| Web Series | Language : Hindi) : As a righteous cop pursues a merciless criminal in Bihar, he finds himself navigating a deadly chase and a moral battle mired in corruption.Created by Neeraj Pandey, Khakee stars Karan Tacker, Avinash Tiwary and Abhimanyu Singh in pivotal roles and streams on Netflix from 25th Nov 2022.

PADAVETTU : ( Genre : Drama, | Film | Language : Malayalam) :
The coming-of-age drama portray the relentless pursuit of the layman, the oppressed section of society who is in a constant struggle and fight to reclaim their unique identity and rightful place in a world meant for all. Padavettu is a socio-political drama set in a North Kerala village named Maloor. It has Nivin Pauly playing Ravi, an athlete who becomes a traumatized man after meeting with an accident. He is stuck in life and finds peace by being lethargic. The conflict comes in the form of a local political party and its head, Kuyyali (Shammy Thilakan). The central theme is about how Ravi transforms to become the oppressed village’s savior.The film written and directed by Liju Krishna and starring Nivin Pauly is going to stream on Netflix from 25th November 2022.

Apart from these, CHUP premieres on ZEE5 Streaming Platform on 25th November and KANTARA, the phenomenal, ground-breaking Kannada film streams on Amazon Prime Video from 24th November 2022. Pan Nalin’s THE LAST FILM SHOW aka CHHELLO SHOW, which is India’s official selection in the International Films category for Oscars, streams on Netflix as well.