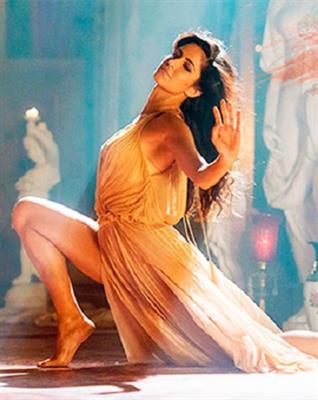 Katrina Kaif has set the screen on fire with her latest "Tip Tip Barsa Pani" from the blockbuster in the making Sooryavanshi starring Akshay Kumar.

Katrina Kaif has redefined oomph in a saree drenched in rain and making the audience especially men go weak in their knees to the song recreated by Tanishk Bagchi.

While the men in vardi (uniform) the policewalas in Rohit Shetty mass pleasing paisa vasool action dhamaal led by Akshay Kumar along with Ajay Devgn and Ranveer Singh are making the audience dance with joy as happy movie watching days in theatres are here again.

The London beauty in her Bollywood duty Katrina Kaif has created a stir with hot and sensuous Tip Tip Barsa Pani - remake of the famous hit from the 1994 cult classic on its own Mohra by Rajiv Rai. The original song was picturised on Akshay Kumar and Raveena Tandon music was given by the trendsetter Viju Shah and the song was sung by Alka Yagnik and Udit Narayan.

One of the leading Bollywood star Katrina Kaif has time and again redefined the hotness quotient with her irresistible oomph and class that comes with unique style and grace.

From Karan Johar’s Agneepath the remake of the cult Amitabh Bahchchan 1990 starrer of the same name. starring Hrithik Roshan the movie by Karan Malhotra had some outstanding music score by Ajay Atul and Chikni Chameli sung by Shreya Ghoshal became the talk of the town right from the word go.

Mashallah (in awe of the beauty) literally from the movie Ek Tha Tiger. Katrina Kaif just killed it with her belly dancing skills in the song sung by Wajid and Shreya Ghosha, written by Kausar Munir and created by Sajid–Wajid.

Katrina Kaif nailed it with her breath-taking moves in the third instalment of YRF money spinning franchise Dhoom 3 co-starring Aamir Khan. Kamli is composed by Pritam and sung by Sunidhi Chauhan.

From Sooryavanshi by Rohit Shetty co-starring Akshay Kumar, this one is the current hotness anthem on screen and has taken fans and the audience in general by storm.