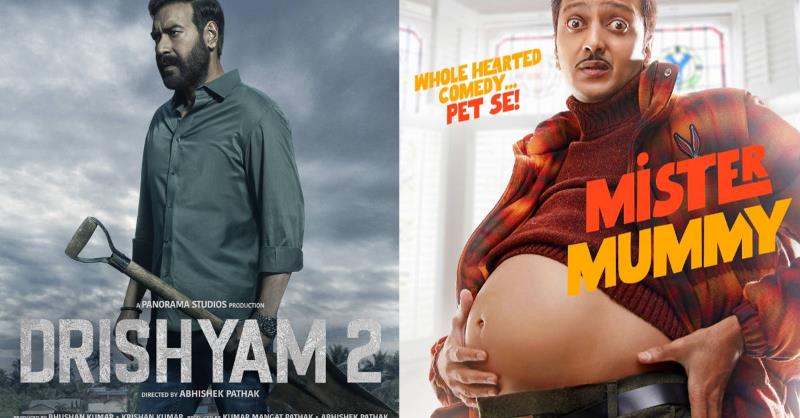 This week on Friday i.e 18th November 2022 we have the list of movies and series to be released.

DRISHYAM 2 : 7 years after the case related to Vijay Salgaonkar( played by Ajay Devgan) and his family( Shreya Saran and Ishita Dutta) was closed, a series of unexpected events bring a truth to light that threatens to change everything for the Salgaonkar. Can Vijay save his family this time? After the late director Nishikant Kamat who had made Drishyam in 2015, the sequel is helmed by Abhishek Pathak who was once of its producers. This brings Ajay Devgn and Akshaye Khanna together after 12 years. Their last collaboration was Priya darshan’s drama, Aakrosh in 2010.

MISTER MUMMY : A cranky PT teacher Amol and his wife Gugloo have opposing choices when it comes to children, but destiny has something else planned for the childhood sweethearts. Mister Mummy stars Riteish Deshmukh and Genelia in lead roles and its gonne be a hilarious ride.

MASOODA : ( Genre : Horror, Thriller. Duration : 2 Hour 40 mins) Neelam, a single mother, with the help of her meek and cowardly neighbor Gopi, struggles to save her possessed daughter from the clutches of an evil force. Masooda stars Sangeetha Krish and Thiruveer in lead roles and releases in theatres on 17th November 2022.

SHE SAID : ( Genre : Drama, Thriller. Duration : 2 Hour 15 mins) : A testament to the power of investigative journalism, She Said details the journey of reporters and editors engaged in the unrelenting pursuit of the truth and highlights the courage of survivors and witnesses who chose to come forward to stop a serial predator in his tracks. Together, their commitment and fortitude sparked a national conversation, helped propel the #MeToo movement, and fueled a reckoning of the system that had enabled him. SHE SAID is directed by Maria Schrader and stars Joe Kazan as Jody.

HOSTEL DAZE Season 3 : The latest season of TVF Creation’s Hostel Daze takes a peek into the lives of six friends who are on a journey of learning and growing as their college course progresses into its third year at engineering college. The now-seniors have to figure out what they are good at and decide the direction they want to take their lives. Exploring new relationships, changing group dynamics, college elections, campus drama and more, Hostel Daze Season 3 takes viewers on a journey filled with more chutzpah, comedy and craziness.The show features crazy hostelites Akanksha (Ahsaas Channa), Chirag (Luv Vispute), Rupesh (Shubham Gaur), Jatin Kishore aka Jhantoo (Nikhil Vijay), Nabomita (Ayushi Gupta), and Ankit (Utsav Sarkar) who are now in third year at engineering college and faced with new dramas and dilemmas. Created by The Viral Fever (TVF) and directed by Abhinav Anand, Hotel Daze Season 3 will premiere exclusively on Prime Video on 16 November 2022 in 240 countries and territories worldwide.

Country Mafia’ stars known actors like Ravi Kishan, Soundarya Sharma, Anshumaan Pushkar, Anita Raaj and Satish Kaushik and directed by Shashank Raai, ‘Country Mafia’ is a 7-part series that will be free to stream from 18th November only on ZEE5. A political revenge thriller, ‘Country Mafia’ is about Ajay (Anshumaan Pushkar) and Nannu (Soundarya Sharma) who were studying abroad to become IAS officers. However, circumstances force them to change the course of their lives and embark on a revenge spree against the biggest liquor baron of Bihar, Babban Rai (Ravi Kishan). The siblings are driven by the burning vendetta which their mother (Anita Raaj) holds against Babban for killing her husband and their father. The show promises its viewers a peek into the liquor mafia world of the Hindi heartland with gripping storytelling and compelling characters. Produced by Gold Harvest Film, the series is aptly described with the logline ‘Chadega Khoon Ka Nasha’.