This week in theatres and Ott - Siblings love, family, triumph of innocence & more 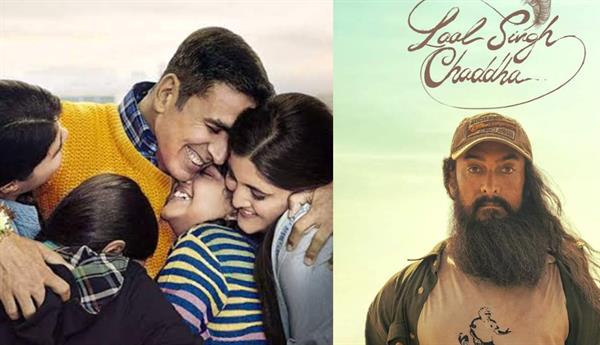 This week on Friday i.e 11 August 2022 we have the list of movies and series to be released.
Rakshabandhan:
A story that celebrates a special bond - Releasing on the auspicious occasion of Rakhi Purnima, Rakshabandhan is the story of one man's determination in funding happiness for his four sisters. Akshay Kumar plays the brother in this Aanand L Rai film, which has his Toilet co star Bhumi Pednekar teaming up again with him.Releasing in theatres on 11th August.
Laal Singh Chaddha:
The official remake of the 1994 Academy Award Winning Forrest Gump helmed by Aamir Khan and directed by Advait Chauhan( of Secret Superstar fame) stars the perfectionist essaying the titular character which was played by Tom Hanks. It traces the guil-less Laal's journey through a time span of 20 years and his 'Golgappe' jaise experiences. Mired with the boycott controversy, the film also sees Kareena Kapoor Khan, Mona Singh and Naga Chaitanya in pivotal roles. Releasing in theatres on 11th August.
Gargi :
A woman's unflinching fight for justice - Gargi is directed by Gautham Ramachandran and stars Sai Pallavi in the lead. This intense thriller released in theatres during mid July and now will be streaming on Sony LIV from 12th August 2022. Don't miss it!
A League of their Own:
Prime Video’s upcoming sports dramedy, A League of Their Own, is an adaptation of Penny Marshall's 1992 eponymous classic film. Co-created by Will Graham and Abbi Jacobson, the story revolves around an entire generation of women joining forces to play professional baseball, both inside and outside of All-American Girls Professional Baseball League (AAGPBL) during World War II. The stellar cast features D'Arcy Carden, Chanté Adams, Melanie Field, Priscilla Delgado, Gbemisola Ikumel, Roberta Colindrez, and Kelly McCormack.
Cosmic Love :
In this one-of-a-kind social experiment, four individuals attempt to find their perfect spouse via astrological matchmaking. Each individual represents one of the four elements of astrology (Air, Fire, Water, Earth). Their romantic adventure takes place at a retreat run by a mystical guide, the Astro Chamber. They mingle, match, date, eliminate, and eventually make the biggest decision of their lives… will they marry their match, based solely on their astrology?
The show's astrologers, best-selling authors Ophira and Tali Edut (The AstroTwins), guide our singles throughout the season by way of the mysterious Astro Chamber (voiced by Cree Summer). Cosmic Love is jointly produced by Amazon Studios and Hudson Media and premieres on Prime Video on 12th August 2022.
I just killed my Dad :
Fans of crime genre will enjoy this gripping and intriguing true crime documentary that streams on Netflix from 12th August 2022. Made by director Skye Borgman who completes his 'unholy'trilogy of projects for Netflix with this, it is a shocking account of the cold blooded murder of Burt committed by his 17 year old son, Anthony Templet.
Tags : Raksha Bandhan Laal Singh Chaddha