Weekend Releases on Theatres and OTT: Action, Ideologies and intrigue. The Republic Day weekend urges you to brace for a action packed time. 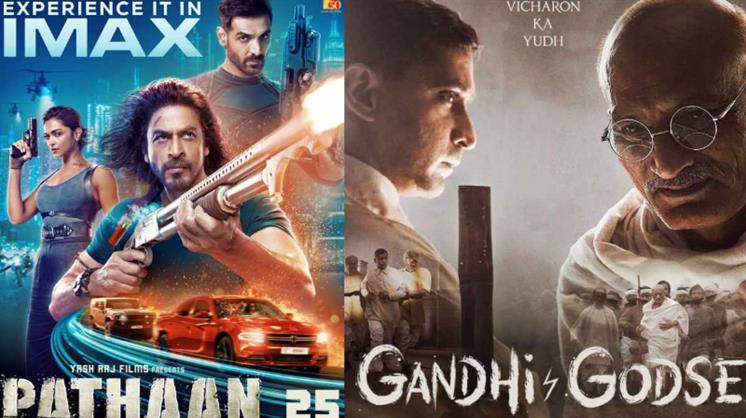 1) Pathaan :
Apni Kursi ki peti bandh lo, Mausam bigadne waala hai. Shah Rukh Khan is back after a hiatus of 4 years to reclaim his stardom.Pathaan, directed by Siddharth Anand and helmed by Yash Raj Films, has generated insane hype and hysteria. SRK plays a spy on a mission to save the nation. The cast includes Deepika Padukone, John Abraham playing the antagonist and Dimple Kapadia. Pathan promises to be a slick action thriller soaked with patriotism.

2) Gandhi vs Godse :
Vicharon ka yudh - The film helmed by Raj Kumar Santoshi, stars Deepak Antani as Mohan Das Karam Chand Gandhi and Chinmay Mandlekar as Nathuram Godse, and is based on a fictitious clash of ideologies and debate between the two. Releases this Republic day.

4) Black Sunshine Baby :
Family memories and personal art movingly portray author and motivational speaker Aisha Chaudhary's journey with an immune disorder and terminal illness. A film " Sky os Pink" starring Zaira Wasim playing Aisha, which had Priyanka Chopra and Farhan Akhtar in lead, was based on this. This documentary releases on Netflix on 24th January 2023.

5) Narvik :
‘Narvik’ on Netflix, a World War II Historical-Fiction Saga About the Nazi Invasion of Neutral Norway.
Narvik (now on Netflix) under Earnest Not Widely Told Stories of World War II, now Significantly More Widely Told thanks to director Erik Skjoldbjaerg (who notably helmed the original version of Insomnia, famously remade by Christopher Nolan, as well as Prozac Nation). It’s set in 1940 in the title town, a seaside community that, as a series of opening subtitles outline, was a strategic linchpin in the conflict between Allied forces and Nazi dickheads, the latter of whom invaded Norway, betraying the country’s status as a neutral state. And as these movies so often go, a smaller story finds itself ensconced in the larger one, in this case, that of a Norwegian soldier who heads off to fight the bad guys while his wife half-works for the occupying German jerks as a translator. The premise sets up some potentially fraught drama, now let’s see what Skjoldbjaerg delivers.
Tags : pathaan gandhi vs godse Black Sunshine Baby Jaanbaaz Hindustan K