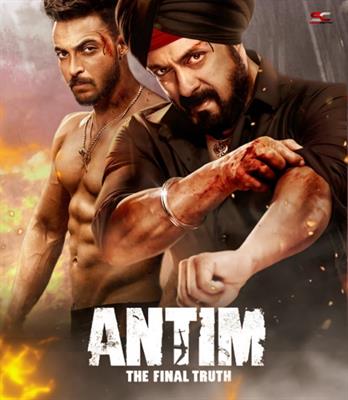 Former Maharashtra Kesari (wrestling champ) Datta Pehelwan (Sachin Khedekar) in his pride to get his daughter wed in style sells his land at a very low price.

Datta Pehelwan then sadly ends up by working as a watchman of the bungalow build on the same land and one day gets abused, kicked and thrown out of the job.

The family is forced to leave their village and move to Pune City to survive by doing jobs as labourers in the main food/grain/vegetable market.

Datta Pehelwan’s son Rahul aka Rahuliya (Aayush Sharma) is unable to take it and before leaving his house swears that he will teach the builder who humiliated his father a lesson.

A day while working as labourers in Pune, Aayush gets into a tussle with the corporators goon who collect ‘hafta’ from the labourers. Leading to Aayush bashing up the goons and landing in police custody.

Senior cop Rajveer Singh (Salman Khan) – dumdaar Sardar is a fearless force who checks Rahuliya’s move as the conflict between the good and the bad takes expected turns.

Those looking for an out and out Salman Khan entertainer, make way for the new bad boy with rage, and attitude - Aayush Sharma.

This should have been Rahul’s better and more powerful Bollywood entry than Love Yatri.

Anyways, Mahesh V Manjrekar in his version of Mulshi Pattern, combines elements from Amitabh Bachchan’s Deewar and own Vaastav, but this is not a complain.

Mahesh V Manjrekar gives his touch and has a strong female character in this genre dominated by two macho males.

Manda (Mahima Makwana) the chaiwali who falls for Rahuliya, ultimately show him his place when the newly formed gangster in his power trip abuses Manda’s drunken father played by Mahesh Manjrekar (who also gets a couple of good punchlines like – expiry date).

Salman Khan’s introduction. The shirtless bout between Salman and Aayush. Salman’s lines in honour of the Sikh community. Aayush’s growing menace. The tussle between Salman Khan and Rahuliya.

Salman Khan as Rajveer Singh, a Sikh police officer is in his known element and will make his fans happy.

Aayush Sharma as Rahul Patil / Rahulya, is the major highlight and he does well and is fantastically menacing.

Coming straight to the conclusion as there is no point in listing the long list of flaws as it doesn,t matter to those who are willing to watch at any cost. The conversion rate (fans turning into actual audience) of Salman Khan is the highest in the Khan trinity in my opinion.

Designed purely for the masses, Antim The Final Truth has the known Salman Khan’s swag but its still not an all and out Salman Khan’s entertainer. Antim is the re - entry of Aayush Sharma and it comes with a fantastic surprise that will make the audience eye brows move upwards similar to what Rahuliya’s in the movie.