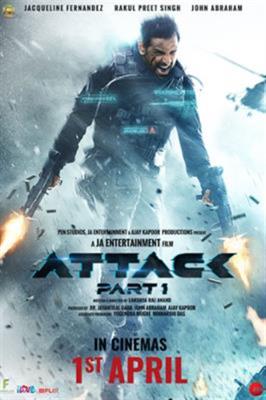 What: Attack Part One review: John Abraham latest is all action. The beginning of the film was so blah and predictable you’d think it’s another of those Hindustan-Pakistan terrorism tale. Thankfully it isn’t. I mean, it is, but then it isn’t.

After capturing and extracting a dreaded terrorist, John is on his way home when he bumps into a pretty girl, literally! This is such a sweet love story that happens on the flight, that you cannot help but smile. I am a fan girl of his dimples, so I was very happy to watch one of Bollywood’s fittest actors on a motorbike, romancing Jaquelene Fernandes.

But you cannot forget that this movie is a John Abraham action film, so you should not expect the romance to go on and on.

The movie suddenly turns into a tragedy when terrorists strike again and they shoot at John. Before you can say what?! Why?! You realize that John is paralyzed by the bullet. But Rakul Preet Singh is there to help! And yes, the reliable Prakash Raj. There is science to the rescue.

The idea of super soldiers is a concept many movies have tackled before.

Just because they show Rakul Preet Singh working at a computer and singing along with headphones, does not make anyone believe that she is a computer scientist specialising in Artificial Intelligence. But this is Bollywood, so we know that our entire Army Research Department is betting on a chip that needs to be inserted into a soldier’s head and he will turn into a super soldier is hard to believe. But once you get over that, the movie becomes fun.

Paralyzed John Abraham is a willing subject and his attempt to rehabilitate with a computer chip ordering him around to do everyday things is rather nicely done. Also the explanation that his memories are like a home screen and he has to get out of it by pressing enter is believable. And his memories with Jacqueline are rather nice…

What happens next is anyone’s guess. Before you can say, ‘The bad guy has been spotted in Europe’, you settle down with cheese popcorn. This is going to be predictable.

But the computer chip inside John’s head knows that the bad guy is in India, at the Parliament. No no, don’t laugh. The terrorists have literally entered the Parliament with a bomb and all.

Prakash Raj does both good boss and bad guy roles rather well. The Army head is yesteryear star Kiran Kumar. But the funniest lines are offered to Rajit Kapur, who plays the Home Minister. He comes equipped with a sycophantic secretary and a social secretary who offers priceless advice like: If you tweet now, and things go bad, you will be blamed…

Thanks to the talkative chip inside John’s head (actually loved the interaction between the chip and John) he is able to figure out how many terrorists are there inside the Parliament. John Abraham is so good in the super stylized fights it’s a great watch. I loved the pause before he kills one of the really bad guys. If you get to the movies with your friends, you will enjoy many action sequences by clapping and hooting!

I am glad this John Abraham movie has a different style of action. I admit much has been taken from Inception and The Matrix, but it doesn’t matter. It’s an easy watch.