Badhaai Do movie review : Many badhaiyaan 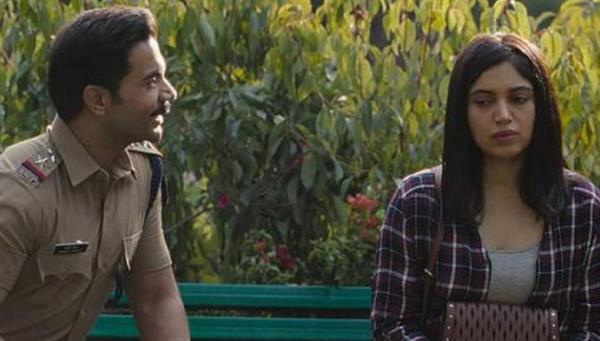 Badhaai Do movie review: Many badhaiyaan for making such a fun film about a sensitive subject

Rajkummar Rao and Bhumi Pednekar, take a bow. This is a film that had me bawling because I have seen friends go through soul shattering developments in their life - losing family and friends because they dared to step out of the closet.

I too have seen friends play ‘beard’ for gay friends because until a few years ago, admitting to anyone that you are gay was considered illegal in India. If you are wondering what a ‘beard’ is, then know that it is a person who is or plays a companion to a gay person so they can hide their true identity.

Rajkummar Rao is Shardul Thakur, a police sub inspector in Dehradun surrounded by a family that has nosey aunts and their grown-up children, a widowed mother who is grieving for her husband for nine years and is a tad off her rocker. The whole family gets together to discuss and vote on everything related to family.

Mostly it is about finding a bride for Shardul who spends more time at the gym than at home. The film opens with the family voting on saying yes to Shardul who wants to marry his Muslim colleague, a policewoman posted at the same station. After a discussion, they come to a consensus that it’s time that they accept a Muslim bride into a Thakur family. This discussion is moot because Shardul says, ’You guys took so long to decide, she has said yes to someone else already.’

Sumi Singh is a Physical Education teacher at a school. Bhumi Pednekar wears tracksuits, rides her scooter to school and yearns for love. She has a brother who wants to be selected for football, a father who runs a xerox and internet shop at a local shopping centre, and a mother who holds a ‘maun vrat’ in the mornings.

Lovleen Mishra has been acting like forever (she was Chhutki in India’s first soap on Doordarshan called Hum Log) and she’s a wonderful actor, saying so much even when she has a maun vrat.

Sumi and Shardul’s paths cross because Shardul has to save Sumi from a creep who chats on a dating app like a girl and then tries to blackmail Sumi by threatening to ‘expose’ her secret unless she ‘tries’ making love to a man. Sumi at first cries, but then complains to the police. Since Shardul is posted at the ‘Mahila Police Station’, he catches the creep and gets a confession.

It was teeth-gritting annoying at first to see the stereotyping of a gay man to be obsessing over his body, and a lesbian who is a PE teacher.

I dreaded the idea of seeing yet another Bollywood treatment of gay/lesbian characters. Thankfully the film turned out to be very different.

What happens next is termed a Lavender Marriage. A marriage of convenience between a gay partner and/or hetero or gay person. This is done so that the families stop forcing the gay child into a marriage against their will.

Shardul and Sumi decide to get married because they cannot possibly come out to their families. The wedding song is one the ghastliest I have seen (an uncle’s trousers come down while dancing, somebody sits down on someone’s lap and they have a plate of food on their lap and so on) and my heart begins to sink. Where is the film going?

They’re honeymooning in separate rooms in Goa. But Shardul is waiting for a younger man to show up. Soon Kabir, Shardul and Sumi have a good time in Goa. They come back and begin their ‘married life’.

But Shardul and Sumi are clear: they’re roommates. Even though Shardul chooses the bigger bedroom, and generally can be an MCP (Sumi actually calls him that!) because he’s expected to be ‘mardana’. The encounter with the police chief and his wife coming home because Shardul is now allotted a residential ‘quarters’ is great fun. Sumi will not make tea or pakoras unless Shardul takes on the chores for an entire week.

After all, they’re partners, and pretending to be the obedient wife means that Shardul has to pay a price.

Badhaai Do: Rajkummar Rao and Bhumi Pednekar, take a bow

If Shardul has Kabir, Sumi will find a partner too. She does. It’s Rimjhim from the lab where Sumi has gone to get her dad’s bloodwork and other samples tested. It’s fun to see Shardul and Sumi explain Rimjhim’s presence in their home. Because Rimjhim is from the Northeast, it is great to watch their neighborhood aunty confused, ‘Real cousin? Kiske side se?

After a while the narrative sags because there are huge adjustment problems for both Sumi and Shardul. Especially because the family now expects the patter of little feet. As both sides begin to mount pressure on the couple, fun things begin to happen. Badi aunty (the awesome Seema Pahwa, who was ‘badki’ in Hum Log) sends Shardul’s mom played by the excellent Sheeba Chaddha (she has played a similar character in a short film segment of an anthology) to their home ‘nazar rakhne ke liye’.

There’s more heartache and more lies and this time you laugh, but the discomfort of seeing them walk that thin line between lies and reality gets bigger and bigger. You know their secret will be out soon. Suddenly you realise that your heart has been stolen by Shardul and Sumi because they show how tough it is to live a lie, day in and day out. When the secret does come out, you will be crying your heart out. When Bhumi Pednekar’s Sumi says, ‘Mera dil rakhne ke liye aap ek baar keh do that you are okay with me being gay’. But the father cannot accept it. Shardul’s family begins calling Sumi all kinds of names. Shardul’s ghastly manly mouche wobbles. And he gives what can easily be termed as the best of the year. I know we’re still in the beginning of the year, but then imagine he sets the standard so high, (so does Bhumi Pednekar, by the way) that everyone else has to meet this benchmark.

The second half of the film is terrific, and even though it tackles all the prejudices people face in the first half, the film becomes too heavy to take. But in the end Sumi and Shardul steal your heart. So does a delightful cameo appearance by…Nah! Won’t spoil the surprise. Watch this film by Harshavardhan Kulkarni!