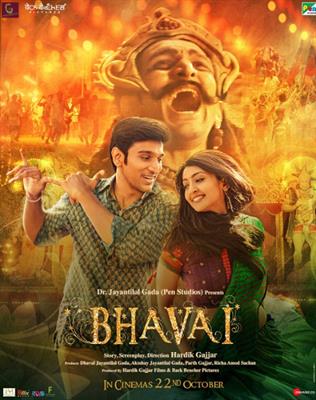 Set in Khakar Gujarat, Bhavai is the story of Raja Ram Joshi son of Panditiji (Rajendra Gupta) who aspires to become an actor one day. A theatre company visits his village to stage RamLeela. Raja Ram tries his luck to bag any role for his debut but gets shooed away.

Destiny starts playing its game and Bhanvar (Abhimanyu Singh) who plays Raavan in the play gets ill. Raja Ram grabs the opportunity with both hands. Raja Ram starts getting attracted towards Rani (Aindrita Ray) who plays Sita on-stage.

Will the on stage/fictional Sita and Raavan can be together in real. Later politics and religion also get involved to complicate things and make it difficult.

The idea of a stage play twining with history or mythology, and becoming a driving force for the actors/people involved in the play, that further incorporates with an actual political/social scenario has been seen in Rang De Basanti ( I mean the basic seed of fact/fiction/history or mythology and real political event).

In fact Rakesh Mehra’s Rang De Basanti draws its basic seed of inspiration from the 1989 French masterpiece Jesus of Montreal by Denys Arcand, that went on to win the Jury Prize at the 1989 Cannes Film Festival and also got nominated for the 1989 Academy Award for Best Foreign Language Film.

Coming back to Bhavai Hardik Gajjar shows a theatrical mirror on how some politician’s cash on religion to garner support and win votes.

Hardik Gajjar’s narration is free flowing and engaging that takes the audience with the flow.

Performance of actors in Bhavai

Pratik Gandhi who gave a knock out performance in Scam 1992 and is a known face in Guajarati cinema excels as Raja Ram.

The experience in theatre and god gifted spontaneity makes him deliver the conflict and shades of his character with extra dignity and poise.

Aindrita is fantastic and charming as Rani.

Other actors add more power with their contribution.