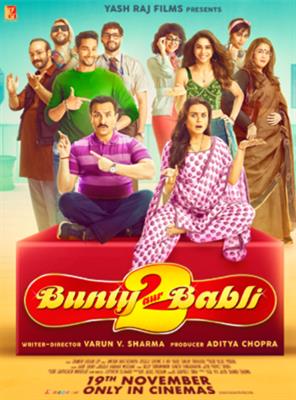 What: What was the idea behind cashing on this 15 year old rom con Bunty Aur Babli directed by Shaad Ali starring Abhishek Bachchan and Rani Mukerji. This produced by Aditya Chopra and directed by debutante Varun V. Sharma starring Saif Ali Khan, Rani Mukerji, Siddhant Chaturvedi and newcomer Sharvari Wagh is such a lazy, self-satisfied boredom that asks for mercy.

Toh 15 years baad Rakesh (Saif Ali Khan) and Vimmi (Rani Mukerji) are settled in Phursatganj (it’s actually a place in UP). They have given up on their con games.  Kunal Singh (Siddhant Chaturvedi) and Sonia Rawat (Sharvari) a young couple has conned a group of people by using their name Bunty Aur Babli.

Inspector Jatayu Singh (Pankaj Tripathi) a junior during those Bachchan’s famous Kajarare days recollects the old memories and he knows there whereabouts. So Jatayu comes to arrest Rakesh and Vimmi. The original Bunty Babli pleads innocence but Jatayu puts them in custody.

Another con by Rakesh and Vimmi bring the senior and junior con artiste together. Ab aage.

What was the reason behind the success of Bunty Aur Babli in 2005.

First for me was the awesome music by Shankar-Ehsaan-Loy. Second of course Abhishek Bachchan and Rani Mukerji’s super chemistry. Third Amitabh Bachchan, Aishwarya Rai Bachchan and Abhishek Bachchan in that song Kajarare written by Gulzar with lines like “ tera aana grami ki looh hai ( your arrival is like the summer heat wave). Such pure daal without tadka writing and a decent one time watchable plot by Shaad Ali.

There was nothing ground breaking in the 2005 version so what made YRF to do a sequel. Is Bunty Aur Babli a trendsetter like Dabangg, Singham, Ek Tha Tiger, Dhoom? No. phir kyu. Aakhir Kyu.

The answer is simple, it’s their product which has earned money so why not cash it on its popularity value and earn more money.

So it’s a pure corporate exercise to create content that piggybanks on its predecessor and earns reasonably enough.

Coming to Bunty Aur Babli 2 it has nothing in respect of its 2005 predecessor.

Imagining Bunty Aur Babli without Abhishek Bachchan and having Saif Ali Khan feels like it’s a sequel to Rani Mukerji and Saif Ali Khan’s Tara Rum Pam or Hum Tum. In fact my beautiful neighbor, a fan of Saif argued when she saw the pics. I said it’s Bunty Aur Babli 2. She asked why is Abhishek not there. I put forward this question that must have popped into the minds of many.

Why is Abhishek Bachchan not in the sequel of Bunty Aur Babli 2. Kyu. Aakhir kyu.?

Can you imagine DDLJ with Kajol and not Shah Rukh Khan.

Perfect.. but hold on this is not the plot. Synopsis is written above so kahene ka matlab no back story either.

The motu Saif Ali Khan and the OTT Rani Mukerji appear forced. Ditto for Sharvari Wagh and Siddhant Chaturvedi. And our dear Pankaj Tripathi is coming straight from the set of Ludo. Mere pyare Aditya Chopra (story inki hai or yeh producer bhi hai) and Varun V. Sharma (screenplay direction inka hai) par kisko chinta hai. Bhaiya kuch to aacha do. Theatres are now open, people will spend money to watch movies on screen otherwise at Rs 10 per day they are having multiple choices on their homes and phones at least in metropolitan cities.

And please don,t ask anything about the music of Bunty Aur Babli 2 by the same Shankar–Ehsaan–Loy along with  Julius Packiam.

Dear YRF, at least hire a brain to understand why was Bunty Aur Babli a hit in 2005.

Bunty Aur Babli 2 is a badly thought-out sequel which has nothing to offer. Okay premise but a terrible screenplay, good locations costumes, cinematography is marred by Rani Mukerji’s overacting, half-hearted Saif, and unconvincing Sharvari Wagh and Siddhant Chaturvedi as actors. They look good at the most. While I join my lovely neighbor over coffee later and make her happy by saying it would have been better to have a sequel of Tara Rum Pam or Hum Tum as you suggested. You can join your beloved and watch the 2005 Bunty Aur Babli. Kajarare.. batao kisne kisko con kiya re.