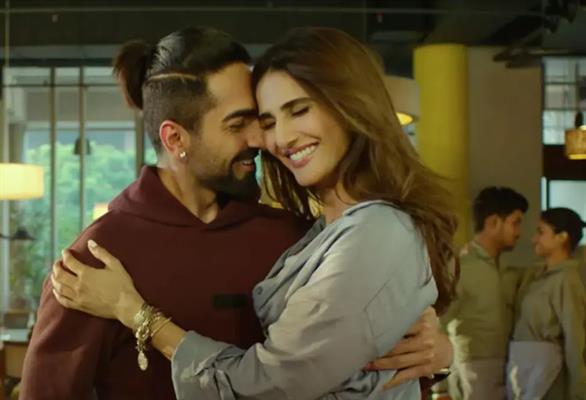 Director Abhishek Kapoor creates a wonderful story of a gabru jawan falling in love with a soni kudi. What could be more macho than a Jatt Gym owner Mannu Munjal (Ayushman Khurana) falling in love-shove with Joomba instructor Maanvi Brar (Vaani Kapoor)?

So Mannu is getting ready to beat his arch rival Sandy at the Sabse Bada Gabru contest. A feat he has tried for the last two years and lost even though Guruji (Yograj Singh) has pinned hopes on Mannu.

They’re so macho, on guruji’s birthday (Guruji runs a gym where they grew up working out) the two rivals pull a jeep to prove they are… Macho!

All these dolay-sholay workouts in his own gym mean nothing because his other partners, the twins (played wonderfully by Gourav Sharma and Goutam Sharma) are seeing that they don’t have too many subscribers… But they have made space for a Zumba teacher who walks in and changes the face of the gym totally!

Vaani Kapoor walks in with her washboard stomach and a killer smile and her ‘joomba’ class brings in not just girls, but men who cannot stop ogling at her perfect body. They are reduced to stuttering a ‘bye’ in English!

The language is Punjabi-style Hindi but then we are so used to Punjab in our movies that it’s ‘very much okay-ji’ to understand what they’re saying.

Mannu Mujal’s family is what you’d picture a family to be. A genial grandfather, a widowered dad (too chicken to bring home his Muslim lady friend, even though everyone knows about her), two sisters are super loving and super hyper about getting Mannu married (You’re thirty years old, when are you going to settle down? Is everything okay down there? Do you not like girls? We are only asking because you have pictures of these macho men all over your walls…).

There are two kids too, but thankfully they don’t feature at all in the film (the filmmaker deserves a five star rating for just not allowing annoying little kids any needless footage!).

They all fall for this English speaking, fab bodied Maanvi who brings Mannu home after he gets a nosebleed. And big beefy Mannu falls for the pretty girl too. The director quickly shows us that the two can’t keep their hands off one another and soon everyone knows they’re together.

But when Maanvi confesses to her past, Ayushman’s Mannu reacts how stupid macho men do. Maanvi’s tears will move you and you realize that your idea of perfect love is shaken. And while you and I can all say Tadap style ‘will die for love’ stories are very 80s, will this story change your point of view?

The Munjal family and the twin partners react to Maanvi the way most of us would. Because they’re so over the top in everything, Mannu realises that his reaction was not justified. But Maanvi is not in any mood to forgive. Never has a rom-com made you want the hero to repent as bad as you wish here.

And never does one think that a muscle bound lad will admit that he was taken by surprise and is sorry he said all those things.

But hey, it’s 2021, and even though you are put off by the pehelwan who may be a fathead, you root for him because he repents. And I like Maanvi’s character who tells him: do what you want to. I dare you.

The story unfolds without any hitch and that two minute information clip opens your eyes too. I loved the two sisters doing jasoosi and coming away misunderstanding everything.

But then they too are like you and me.

Wanting matrimonial sites to fix all their lives. The songs are really catchy and the Holi dance sequence is rather seductive. And yes, the comedy is in the writing and the situations, no weird comic sounds or laugh track to tell you they want you to laugh.

This love story will win you over and you will come away after the credits roll along with a lovely song smiling from this very hatke love story. You will also wonder where the twins were all these years?!