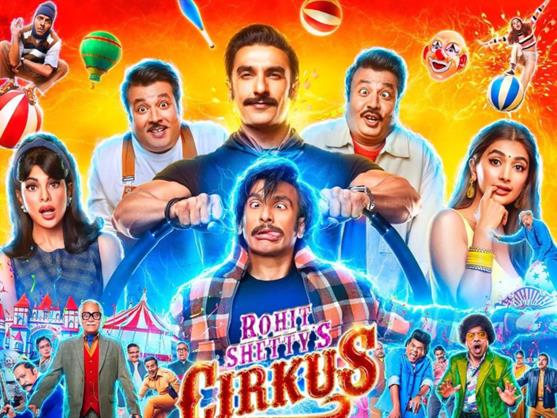 A crazy doctor in his weird surreal experiment to prove that it’s the parvarish bole toh upbringing important in an individual’s growth as a human being separates two identical twins. Coincidentally (primarily in fact to suit the narrative) both the identical twins get the same name.

Ranveer Singh (Roy and the Current Man) and Varun Sharma (Joy no other identity for this poor fellow just a slight change in his moustache).

And this weirdo medical expert keeps on visiting these two families to find out the success rate of his experiment.

But the biggest suspension of disbelief challenge comes when one fine day a young 7 – 8 year old Cirkus family adapted Roy grabs the charged naked electric wire to protect his brother without any jhatka, shock.

The people around are shocked and so are we… how this happened and we never come to know from where does this Roy got this electric vardaan… (boon, special ability).

And there is confusion chaos as happens in such genre but with minimal effect, current laga… na ji naa

This double trouble by Rohit Shetty ji fails to machaao the required hulchal in our funny bones.

A bheja dry inspiration cooked on tired imaginations spins no surprise and lacks the ‘current’ of the trademark feel good slapstick and harmless comedy vibes as seen in Golmaal, Bol Bachchan etc.

A sour boring, khatta instant noodle type tribute to the Gulzar sahab’s ultimate classic Angoor starring Sanjeev Kumar and Decen Varma in one of them most unforgettable roles.

Ironically, Cirkus is as forgettable for Rohit Shetty, Ranveer Singh and co as Angoor is memorable for Sanjeev Kumar, Deen Varma and Gulzaar.

The bland boring Cirkus get some relief from the following Jokers (character actors) instead of the main lead Ranveer and Varun. What a pity.

Sanjay Mishra as Rai Sahab- Bindu (Jacqueline Fernandez) father is in his known element and entertains.

In a short cameo Johnny Lever as Polson bhai underlines the difference between the King and followers.

The so called high energy of Ranver Singh is absent; he is dull and performs way below his caliber.

Varun Sharma is fine in his part but he fails to get any scope from the writers.

The ladies Pooja Hegde, Jacqueline Fernandez are plain and average. Ab kaha Mausmi Chatterjee and Padma Chavan from Angoor.  Deepti Naval’s character (played by Radhika Bangia is reduced to minimum by the makers).

Why the character of Aruna Irani got omitted?. Rohit Shetty ji?.

The production values are topnotch, camerawork by Jomon T. John is a treat to the eyes. The use of retro songs of the era is fabulous.  The movie looks rich, bright and colourful.

The current laga re is good while watching but the logic behind is completely missing. Deepika and Ranveer are killing in that song?( but for that you don,t have to book tickets and watch the movie).

Cirkus is such a disappointment that it is difficult to say which one is better in comparison – Dilwale ya Cirkus. Rohit Shetty fails to make us LOL. Cirkus lacks the ‘current’ of a Rohit Shetty entertainer. Still for its cleanness, fit for family watching, nothing objectionable, family things I go with 2.5 stars in generosity and festival mood.