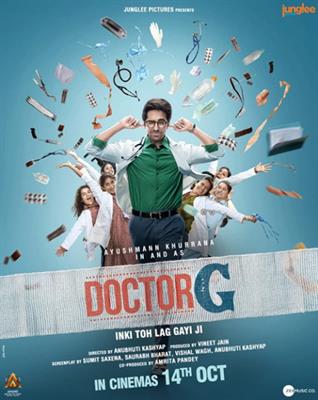 What: Doctor G – Ayushmann Khurrana is back to his offbeat territory to beat the prejudice clichés as a male gynecologist in Anubhuti Kashyap directed quirky slice of life social drama.
Doctor G movie synopsis
Dr Uday Gupta (Ayushmann Khurrana) desires to be an orthopaedic doctor but destiny lands him in the female dominated gynaecology department of a medical college in Bhopal. Left with no option, Dr. Uday takes it up and faces ragging from his female seniors and encounters hilariously awkward situations.
The head of the department Dr. Nandini Srivastav (Shefali Shah) a nonsense medical professional sees not much hope in Dr. Uday but gradually Dr. Uday comes to terms with the situation and becomes a responsible gynecologist and a better human.
Doctor G movie review
Society kya kahegi, ‘Jo cheez mere paas hai hi nahi, uska ilaaj kaise karoon’ the dilemma of the confused Doctor G (Dr Uday Gupta) played by Ayushmann Khurrana is convincing.
However the other parallel stories in Anubhuti Kashyap’s directorial in a script jointly penned by Sumit Saxena, Saurabh Bharat, Vishal Wagh and the director himself in her major mainstream adventure fails to coin with the main story line.
An ‘A’ certified Ayushmann Khurrana starrer does has that unique out of the box heroism associated with  Ayushman since his Vicky Donor days but the on and off gender equality debate twined with medical education on who should study what starts off well but fails to reach the expected heights.
The side story of Ayushman’s friend, a successful doctor who makes his intern pregnant anyhow manages to fit in but the pyaar mohabbat ya dosti track with Dr Fatima (Rakul Preet Singh) looks lovely but fails to make your heart beat/feel the same.
The track of Ayushman's friend who stays with him as his paying guest is half baked. Plus the wishes of single mother Sheeba Chaddha as Lakshmi Devi Gupta – Ayushman’s mother is also half cooked. Why such inclusions were made god knows. It seems that the team of four writers including the director had managed to sandwich their individual stories running in their mind in the main plot bread but forgot to add the required butter, provide the grill when needed and missed the tangy sauce to make a delightful lip smacking sweep.
However the light hearted moments and a couple of situational comedy scenes and performances make it a safe and healthy watch.
Performance
Ayushmann Khurrana (routine nothing exceptional but still pleasant – however a danger of getting repetitive looms clearly now).
Rakul Preet Singh fine.
Supporting cast chip in with good support like Dr Jenny Jacob (Priyam Saha), Dr KLPD aka Kumud Lata Pamulaparthi Diwakaran (Shraddha Jain) and Shyam Bhimsaria – the clerk at the medical department who informs about the empty gynecologist seat to Ayushman.
Final words
If you love Ayushman more than anything else and are carrying zero expectations then Dr G might be your key for a 2+ hours quirky coming of age fun.