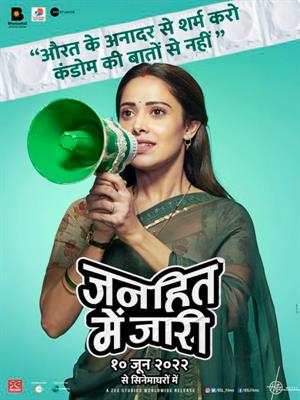 Vinod Bhanushali’s production house Bhanushali Studios debut as producer Janhit Mein Jaari starring Nushrratt Bharuccha is a rare phenomenon, a quirky entertainer that enlightens and empowers with solid performances and regular punches that hits with its witty wits and at times does more…

Manokamana (Nushratt Bharuccha), a young and open minded free willing girl from the picturesque Chanderi town in Madhya Pradesh takes up the challenge to sale the little umbrella brand condom made by the local manufacturer played by Brijendra Kala.

How Manokamana with the help of her friend played by Paritosh Tripathi fights the social taboo, the patriarchy mindset, finds love in the local artiste played by Anud Singh Dhaka who belongs to a family headed by Vijay Raaz a staunch supporter of the cliché male dominance and patriarchy mindset.

Manokamana gets married and then one day hell breaks loose in the parivaar but now it’s not just about condom sold by the woman – the bahu of the household, its more serious.. 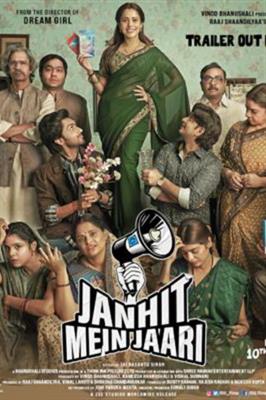 Writer and co producer Raaj Shaandilyaa (Dream Girl, Kapil Sharma etc) and the director Jai Basantu Singh marvelously twine the quirks of a romantic comedy drama with woman empowerment essentials like the right to choose, having a say in the society with the dangerous hazards of unprotected sex/abortion to convey a strong message of equality and choice with a smile without getting preachy and coming right into the face of the audience.

Beginning with a funny introduction of Brijendra Kala and Nushrratt in a bus, Janhit Mein Jaari has many light hearted incidents that sometime come with hidden nuances and deliver the message.

The easy, pleasing, entertaining and thoroughly absorbing narration by Jai Basantu Singh that is the result of a proper script by Raaj Shaandilyaa that takes care of the lingo, milieu and humour which is healthy and riveting from time to time.

The characterization of the principal characters comes with a graph that is easily convincing and instantly identifying.

Raaj Shaandilyaa does a super job in giving us moments after moments of enlightening fun that sometimes hits you inside and probes.

Nushrratt Bharuccha excels and comes out as a perfect choice. Janhit Mein Jaari is her film and tough one to carry looking at the sensitivity of the core issue but Nushrratt gives not a single chance to complain. Marvelous.

Paritosh Tripathi as Nushrratt Bharuccha’s friend and the silent aashiq (lover) inside is awesome. Some actors are gifted with unique sense of comic timing. Paritosh has that.

Ishtiyak Khan as Nushrratt Bharuccha’s father is outstanding, movies like Janhit Mein Jaari should be made time and again to provide opportunities to talents like Ishtiyak Khan.

Sapna Sand as Nushrratt Bharuccha’s mother in the movie is a delight.

Coming to the seasoned veterans

Vijay Raaz is just brilliant. In his known element but still comes out with something different with his pause and unique body language.

Vikram Kochhar has its moments

Last but not the least the veteran Tinnu Anand is a pleasant surprise. And has one really hilarious scene.

The music by Parini Siddhant, Madhav 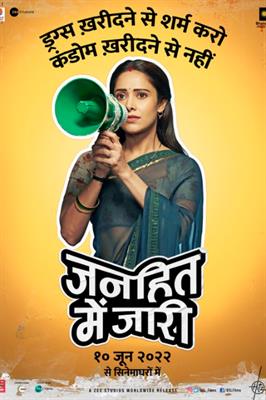 I fail to understand the mindset of modernity in our films. Why a woman has to booze to convince the audience that she is modern. She is modern and open minded because she thinks and has a mind of her own.

Janhit Mein Jaari is enlightening, entertaining & empowering story it has laughs, tears and a strong important message. Do make a choice this Friday.