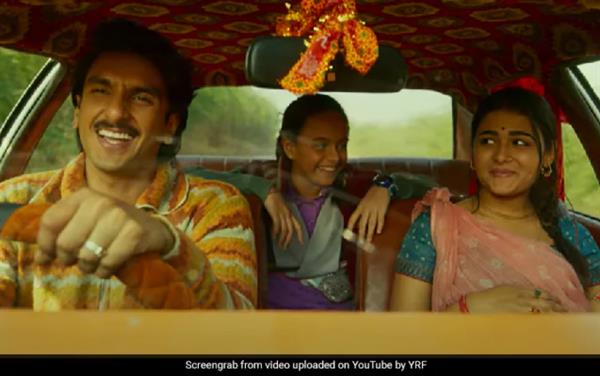 What: Jayeshbhai Jordaar - The premise of saving the girl child is fine, great even, but Bollywood gets in the way. There’s too much flash and overacting around Ranveer Singh for the movie to be wonderful.

Legend says, Bollywood men have to be ‘mard’. They walk about with a swagger, sing lewd songs with ‘item girls’, even chase the heroine until she says, ‘Yes!’, they beat up a hundred baddies as cops and action heroes, save damsels in distress. How does Yash Raj then expect people to like a well-meaning lad, who gets beaten and bullied by his father? Why will the collective hearts of young women across India - who likes his wife, and feels guilty for not having the courage to stop the forced abortion of six girl babies - skip a beat for this not-in-your-face hero?

Sure, look away. Because India, you are guilty of looking the other way when families insist on ‘try again’ until the daughter-in-law is pregnant with a male child. You will hear, ‘Why did they make such a film?’ ‘Why did Ranveer Singh agree to such a role?’, ‘He was so gorgeous in that Goliyon ki Leela film’, ‘He was so manly in Padmavat! Why did he choose to be such a wimp?’

Jayeshbhai is a renaissance man. And nobody is going to understand him. Especially because Bollywood has been feeding us the toxicity of Kabir Singh, the madness of Pushpa, the mensch men in RRR, and the trailer that comes attached to this movie, glorifies war and a woman who chooses to marry a statue…

So Jayeshbhai who looks like a gentle lad who is going through an awful time because his wife (Shalini Pandey) is pregnant, and everyone is expecting that she had better deliver a male child or else…

The option is to send her back to her parents’ home because she cannot produce an ‘heir’. The older daughter that Jayeshbhai has is called a ‘mistake’. He is the wimp who loves his wife, but cannot do anything because the father (Boman Irani) is physically stronger and is the sarpanch of the village. The mother (played wonderfully by Ratna Pathak Shah) is complicit in the ‘want a male child because only he can carry the family name forward’ brigade.

We Indians treat daughters differently than the sons. I was horrified to see the quid pro quo marriage where one family promises their daughter in marriage after their son marries the daughter of that family - a practice started to ensure that their daughter is treated well. If you beat or mistreat our daughter, we too will mistreat our daughter-in-law (their daughter!). No one thinks this whole thing is barbaric, and no one stops beating women, and the whole idea is abhorrent. It’s like Boman Irani’s solution to boys passing lewd comments on schoolgirls: stop using soap, so the boys won’t be distracted by you smelling so good and will not be compelled to sing lewd songs…

Kudos to Ranveer Singh for choosing to play a wimp. How many Bollywood stars would dare to play such a role? Alas, the story falls apart around him. Everyone knows that the ratio of males and females is horribly skewed in the North (in this case Haryana), but Puneet Issar’s Lado village full of men, as an exaggeration is not good writing, it is just bad comedy. Even the men chasing Ranveer’s pregnant runaway wife and daughter stopping because a black cat crosses their path is totally unfunny. Yes, people believe in superstition and bad luck brought on by cats coming across your path. It was enough that we saw a goat predicts the sex of the child and the Rajasthani baba doing a headstand to predict the gender of the child, the Bengali lass who calls her Gujarati husband a ‘Chhagol’ (a goat)… These were funny though.

‘I yearn for a pappi from my wife…’ seems to be a downright stupid reasoning. What Ranveer wants to say is simple: we Indians fight in public and yet, we are too embarrassed to display any kind of affection in public. We don’t make love, we just produce heirs for family’s sake… It became very weird when all the women said, ‘We too want a ‘pappi’!’

Better writing and direction that wasn’t so slapstick and desperate for laughs would have helped in making the point clear. The little girl who plays Jayeshbhai’s older daughter Siddhi is very good as a smart phone savvy daughter who knows how to ask ‘Saralaben’ (Siri for you Urbanites!) for help. I liked Jayeshbhai. He’s a good guy. But he is not going to be exactly Jordaar at the Box Office. Real heroes rarely are. Most people are happy to dance to ‘Koka, koka koka!’