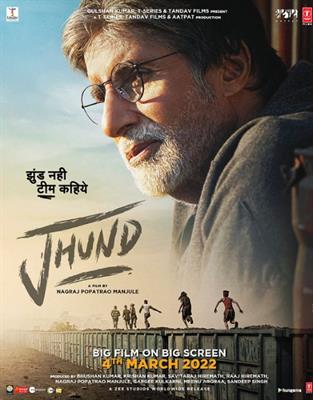 Jhund is a biographical drama based on the life of Vijay Barse, the founder of NGO Slum Soccer.

Megastar Amitabh Bachchan plays Vijay Barse a sports coach on the verge of his retirement spots unique talent in the kids of adjacent slum next to his college and decides to train them.

The underprivileged kids of the slum lead by Don aka Ankush are involved in petty crimes and addiction.

How Vijay Barse transforms these kids into focused human begins and gives them a purpose reason to live and get noticed finds the crux of this movie.

From path breaking Sairat to the path assuring motivational slice of life wrapped in an incredible tale of upliftment Jhund - that uses football as a tool to kick issues of empowerment, class divide, women education and more in his entertaining and enlightening cinema, Nagraj Popatrao Manjule delivers a winner once again.

Opening with a scene where Don aka Ankush’s mother is confronting his husband for coming home drunk once again. We see don moving to his daily routine in a brilliantly edited and filmed sequence and we are introduced to these fascinating kids – mostly teenagers who are mischievous, sometimes bad mouthed and aggressive but no way bad, evil or dangerous. As the credits roll in a déjà vu of Fernando Meirelles & Kátia Lund’s masterpiece City Of God (2003) made a splash for a while. Thanks to the sheer brilliance in editing by Kutub Inamdar and Vaibhav Dabhade and of course the class cinematography by Sudhakar Reddy Yakkanti, hinting that we have a movie to savor.

Writer director Nagraj Manjule uses metaphors like the wall with iron fencing separating the privileged and the underprivileged world.

Nagraj Manjule makes the world of Don Ankush fascinating with his sheer passion to add a unique flamboyance, colour, humour and music to their journey.

The scene when the ‘jhopadpatti’ team arrives in all their jazzy flamboyance to play their first match with the trained and privileged college team is a scene which you will watch it again and again.

Jhund is not just a sports drama, its beyond, it’s an urge to look beyond the muck, an appeal to stay united, a plea o accept humans as a human without wearing any dark glass of class, caste, creed etc.

The dialogues are clap worthy and the pitch perfect casting by Shantanu Shrikant Bhake makes it more realistic and identifiable.

Amitabh Bachchan is class apart. The icon for the icons is flawless as Vijay Barse. Sheer brilliance. Sheer class.

The actor who plays Ankush (also Don/Ankush) is brilliant plus all the kids from the slums are stand out.

Sairat fame Rinku Rajguru is outstanding in a cameo.

Aakash Thosar (another Sairat fame - Sairat is inseparable from, Nagraj and we have no complaints).

The brilliance of Kutub Inamdar and Vaibhav Dabhade in the editing department and the class cinematography by Sudhakar Reddy Yakkanti has been mentioned earlier. A shout for Snigdha Karmahe and Pankaj Pol production design is a must. The art direction by Binay Sarkar is purely authentic.

The second half takes a beating and fails to match the tremendous energy and enthusiasm level experienced in the first half. Falling into the trap of a sports biopic clichés easily for a while until the ‘pehachan patra (identity document) episode arrives to rescue to bring Jhund back to its originality and own identity.

Jhund is not just a movie that sees the magnificent Amitabh Bachchan in a class act, it’s an incredible story of upliftment that needs to be told, Nagraj Manjule has achieved the ‘goal’ to deliver a cinema that will be savored.