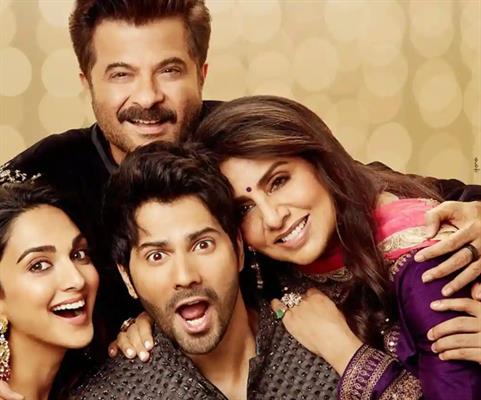 ‘She (Your mother) is like a vegetarian sherni, she won’t eat and won’t let me either!

The drunk dad jokes come fast and furious and I laughed, not thinking about how they’re unfunny when they are told in real life and you want to be the daughter who says to her dad, ‘We need to delete your whatsapp!’

But Anil Kapoor, who plays dad, has such superb comic timing that you don’t mind. After a long time, I have actually laughed at the jokes that did not stop coming at me. So right away you want this family to stay together.

The trailer has given the plot away, so you know what dad is going to tell his son. Varun Dhawan plays Kukku, the son, who has his own secret to share with dad. Kukku’s wife is Naina Sharma played by the gorgeous Kiara Advani (she’s just getting better and better with every movie!). She’s getting promoted at her job in Canada while Kukku is getting vomited on by drunk women (he plays a bouncer at a nightclub). I don’t know if Varun Dhawan is pissed off because he has the same job as Tiger Shroff in Heropanti 2 or he’s mad at his wife for being successful. This is where the skimming on details begins.

You’ve seen many Netflix movies where drunk lads ruin their marriages because the wives have a better job and they begin to seethe because they cannot be ‘man of the house’. Well, but Kukku’s sister Ginni is getting married so they decide to play happily married ‘bhaiya and bhabhi’...

The rest is well predictable but not too predictable. Kukku’s friend who happens to be Naina’s brother Gurpreet (played very well by television star Manish Paul) ‘helps’ Kukku keep his family together.

Gurpreet not only dresses quite over the top but kudos to the writers: Rishhabh Sharma, Anurag Singh (who also gets credited with the story), Sumit Batheja and Neeraj Udhawani who created this character. And hats off to the person responsible for Gurpreet’s costume (especially great sunglasses!), and art direction that pays attention to silly things like Gurpreet’s desk that has a name plate that says ‘Gurpreet Sir’ describing him as ‘Businessman’.

That brings us to an old favourite: Neetu Singh plays Kukku’s mother and Anil Kapoor’s wife. She is the glue that holds the home together, and I wish the movie had spent a little more time on her rather than everyone else.

Perhaps a line like ‘Mothers are invisible and only when she stops being that does the family understand her value’ (there is an excellent play that has been made in Gujarati, Hindi as well as in Marathi: ‘Ma Retire Hoti Hai’, which makes that point very beautifully).

That one scene with Neetu Singh and Tisca Chopra is well done, but comes out of nowhere, because so far we have not seen the quiet steel in Neetu Singh’s character as mother.

I think Varun Dhawan does an excellent job as a son caught between the drama in his life and that in his parent’s life. His confusion, his anger, his self loathing come across very well. And you want him to find a solution to all his dilemmas.

Super High on Fun, High on Drama, but Skims on Emotions

The weakest link in the whole movie is the sister Ginni (played by Prajakta Koli) who is getting married. There was just no need for her to be in love with one guy and then get married to another. Isn’t there too much drama already? I would have been happy to see her look up to mom and dad, brother and his wife as ideal couples and discover that marriage wasn’t all that it was presented to be. I wish they had just spent time on the mother’s character. That little encounter between Neetu Singh and Kiara Advani was delicious. And yes, I should be calling her Neetu Kapoor. I wish she gets more roles in many more movies.

And yes, stay for the end credits because the song ‘Rangisan’ is simply brilliant. A Shobha Gurtu traditional Thumri sung by Kavita Seth and Kanishk Seth and shot as a modern love song in a disco! Very nice!