Kahaani Rubber Band Ki Review: The idea is novel, but the writing is juvenile 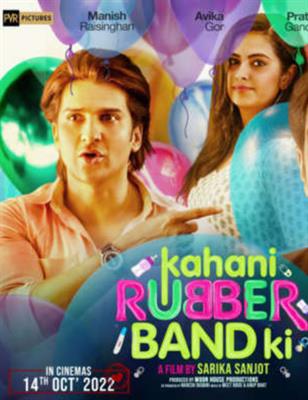 Kahaani Rubber Band Ki, written and directed by Sarika Sanjot, is a humble endeavor to educate and entertain that segment of audience who are still not shy and conservative around the usage of condoms - the primary protection that adults use to control population and unplanned pregnancy
With its intent to spread social and public awareness, it narrates the tale of a young, gorgeous couple - Akaash(Manish Raisinghan) and Kavya(Avika Gor) from different communities who live in the interiors of the state of Uttar Pradesh. Their lives are turned upside down by an accidental pregnancy caused by a "protection" malfunction, shattering all of their dreams.This leads to misunderstandings and the complete breakdown= of a beautiful and endearing relationship between Akash and Kavya as well as between their two adorable families. How Akash accepts responsibility and files a complaint against the "V Care Condom manufacturer" not just to protect his relationship with Kavya but also to promote public awareness.
Sarika has a premise that looks good on paper but it falters in execution. The writing and screenplay( co-written by B S Nirmal Raj) are weak and the jokes are juvenile. In its 2 hour runtime,The courtroom drama actually begins after almost 80 minutes. The performances from the starcast are also not upto the mark.Manish looks like a hero from the early 2000s with long streaks of hair which Suniel Shetty used to sport in that timeline. Avika is still under the shadow of Balika Vadhu.Their affair is quite campy and unconvincing.
Pratik Gandhi who plays Manish'e bestie and fights his case, holds the only promise but is saddled with a half-etched characterization and falls short of the footage as the story mainly focuses on Akaash and Kavya.Manish Raisinghan and Avika Gor’s chemistry also lacks the lustre.Not to blame them completely, but their potential is squandered by an amatuer execution. It was however a pleasant surprise to see Aruna Irani back on the big screen after a long time.
Banaras, which is has lately been the hub of indigenous stories, is captured gorgeously along with the streets, river and ghats under the lenses of Farouk Mistry in the film.I wish the story had more depth and humor, which is confined to condoms being addressed as Rubber Band. Hence the title. True, it tries to tackle a social stigma and the taboos associated with contraceptives, but neither the jokes nor the message land cohesively.The main power of the film, supposedly, the courtroom tussle is devoid of urgency and tension.Its outright rudimentary.Comparatively, Helmet and Nussratt Bharrucha starrer Janhit Mein Jaari were better made films. Kahaani Rubber Band ki feels like a sit-com.

I go with 2 stars out of 5 for Kahaani Rubber Band Ki.The film has been released at theatres near you.