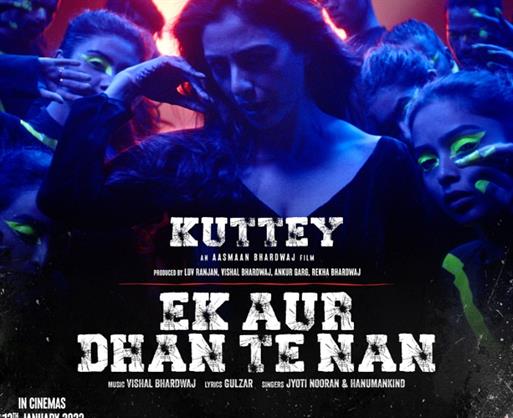 What: Kuttey – The debut of Vishal Bhardwaj’s son Aasman in the filmi jahan is an incoherent misfire attempting to meld the legacy of Vishal Bhardwaj cinema with his previously known gali galloch with blood and gore formulas inspired by Shakespeare ji’s story told in Guy Ritchi’s glory.
Kuttey movie synopsis
Told in chapters, Kuttey is based on greed and told through a fable of bichhu and maindak, (scorpion and frog), it begins with a beaten and bruised Laxmi (Konkona Sen Sharma) a naxalite leader locked in jail, Paaji (Kumud Mishra) is the police officer who has some sympathy towards her. The naxalite leader gets rescued by her people followed by the massacre of people who are involved in their leader’s arrest that includes the local politician played by Anurag Kashyap who gets beheaded. Mishraji is spared as he tries to stop his senior from raping the naxalite leader.
Thirteen years later, Kumud Mishra is the associate of Gopal (Arjun Kapoor) – corrupt police officer, on an assignment form the underworld don Narayan Khobre (Naseeruddin Shah), things go weirdly wrong and they find themselves entangled in a heist on a rainy night in the outskirts of Mumbai. The heist now has three stray gangs unknowingly crossing paths on the hunt, that includes Pammi (Tabu) senior Police Officer, Lovely (Radhika Madan) Khobre's daughter and Danny (Shardul Bhardwaj) - Khobre's trusted servant. what happens next?.

Right from the title till the end (Vishal Bhardwaj made Kaminey), the debut of Vishal Bhardwaj’s son Aasman is nothing different from his father’s movie universe.
Writer director Aasmaan Bhardwaj with additional screenplay and dialogues by Vishal Bhardwaj, Kuttey is a well designed show reel of Vishal Bhardwaj cinematic universe – gangsters, corrupt police officers, drugs, blood, swear words, heist, love, lust, betrayal, satire, black humour, and hardly any character with good human virtues.
There is nothing that can underline or highlight the uniqueness of Aasman as a storyteller. Kuttey feels like a Vishal Bhardwaj (VB) movie. But that doesn't take away any credit from Aasman as a storyteller, to fit in the mould of VB cinema is not an easy task at all.
All the ingredients found in Guy Ritchie, Tarantio etc – the poojaris (worshippers) of pulp, blood, swear, blended with dark satire will be seen in Kuttey. But will that differentiate Aasman from his father VB?, I don’t want to get involved in any personal attacks but the comparison will be inevitable.
Kuttey isn,t that bad if you are a fan of VB cinema, the script does provides a few moments of dark humor, thrills, and entertainment.
The entire whatts up group scene and the chase for the driver, the vehicle chase scene, the dialogue – logic nahi, yeh mera character hai.. and the use of the scorpion and the frog story in the narrative are definitely the high points.
But the thing is - the father and son duo is so lost in their own world, to such an extent that the disconnect with the audience is felt in the very early stages. Second half does pushes the momentum but after a while it's back to square one.
I enjoyed the satire which could have been a knockout punch if the writer-director had controlled his influence with VB and Guy Ritchie and narrated the story with more clarity and establishment of his prime characters, they just suddenly pop up. 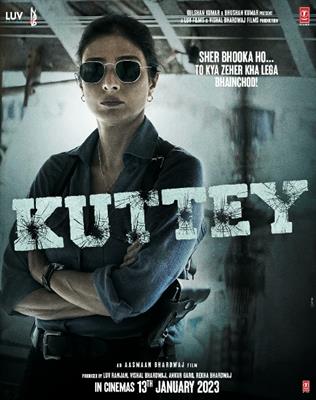 Performance
From the assembled cast, it’s the women brigade that rules
Tabu in that badass gaali giving female cop is outstanding.
Konkona Sen Sharma is fantastic once again.
From the male brigade
Kumud Mishra is marvelous
Shardul Bhardwaj makes an impression
Arjun Kapoor is a misfit
Naseeruddin Shah is wasted
Radhika Madan is okay 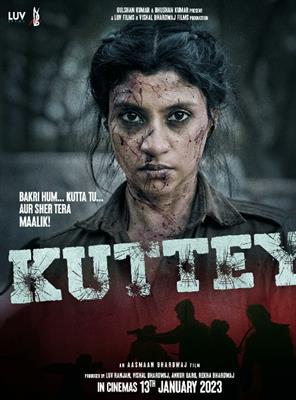 Final words
Kuttey – all said and endured with obviously almost nothing to be savored except that dialogue – logic nahi yeh mera character hai (which ironically fits this VB ka cinema universe), Kuttey – the debut by Vishal Bhardwaj’s son Aasman isn't intellectually challenging as much as it is confusing, and lacks the surprise big twist and sweeping end. These Kuttey’s are no Kaminey.
This is a movie that can't decide what it is or what it wants to be. Advisory: This film contains swear words, violence, and adult language.