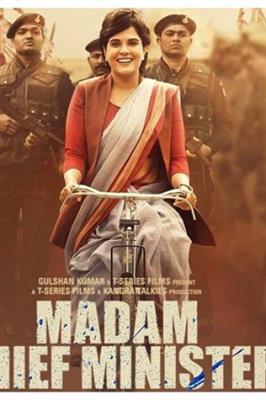 Written and directed by Phas Gaye Re Obama, Jolly LLB series fame Subhash Kapoor is more fiction then fact. Yes, traces from the political life behenji urf Mayawati can be felt. The slogan tilak tarazu, the guest house incident. But Subhash Kapoor takes a leaf from the incidents that happened and changes it completely to suit his screenplay which is engaging enough to hold you through as an escapist movie on a feisty, bold and brave woman who changed the outlook of caste politics in the Hindi heartland.

Subhash Kapoor’s days as political journalist during the 90s must have been the inspiration behind Madam Chief Minister.

Richa Chadda nails it with authority. Bang on as Tara the iron-willed woman, Richa’s act is powerful enough to sway you.

Madam Chief Minister is a Richa Chadda’s show. Watch it for her powerfully feisty act.