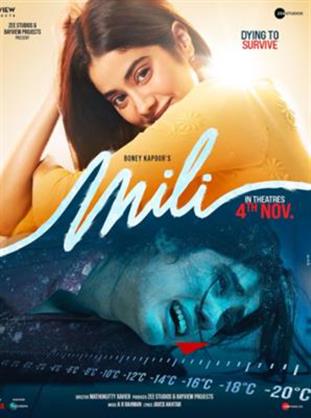 What: Mili - Jahnvi Kapoor finds herself in, as the eponymous protagonist in Mili, a frame by frame adaptation of the Malayalam original, made by the same director, Mathukutty Xavier.

I remember how the Anna Ben starrer 'Helen' which I had watched during the lock down last year on OTT had a profuse aftereffect on me. It was about a girl who gets inadvertently locked inside the freezer room of a fast food restaurant in a mall. Her plight was deeply overwhelming, her struggle was harrowingly palpable. The film was honoured with National awards in 2019.

Mili Naudial is a 24-year-old girl in Uttarakhand who trains as a nurse during the day and works in a fast food restaurant during the evening. Besides aspiring for higher studies in Canada, she also wishes that her doting father (Manoj Pahwa) quits smoking one day and her doting boyfriend, Sameer(Sunny Kaushal) gets a job so that they can bring up the 'rishte ki baat' before his father.

Before throwing Mili into the incredible scenario, Xavier does an effective plot build up that touches upon her supportive co-worker and friend, a pesky boss, affable neighbours and a wicked Policeman who lodges a complaint against her boyfriend for drunken driving.

If you have seen the original, it won't trouble you much except for a compelling performance by Janhvi.

Creating a sense of unsettling urgency and dread, Xavier conjures a very intimate struggle for survival that examines the protagonist's courage and grit. With the temperature falling to minus 18°C, Mili, battered and bruised, doesn't lose hope and fights the soaring chills.

Mili's father and boyfriend are also pitted in the race against time to trace her, while they deal with the disgustingly apathetic cops.

It makes the viewer squirm in the seat when the camera (DoP Sunil Karthikeyan) unflatteringly pierces into her frost bites and the rapidly changing colour of her skin through the close-up shots.

In the claustrophobic confines, Mili's companion in the form of little mouse reminded me of the 2017 impeccable survival drama, Trapped.

Monisha Balwada makes precise use of her editing scissors to give a tightly knotted and solidly paced narrative. Music by AR Rehman is a let-down. I also found the background score a bit over the top.

Xavier balances the nail-biting moments by injecting emotional dopes of the father-daughter dynamics with an unmistakable finesse that also brings to fore the acting prowess of Manoj Pahwa. Sunny Kaushal is earnest and shades his character with vulnerability. Jahnvi is terrific. Jackie Shroff, in his 2nd appearance of the week, impresses in a cameo. It was nice to see Sanjay Suri play a good natured and honest senior cop.