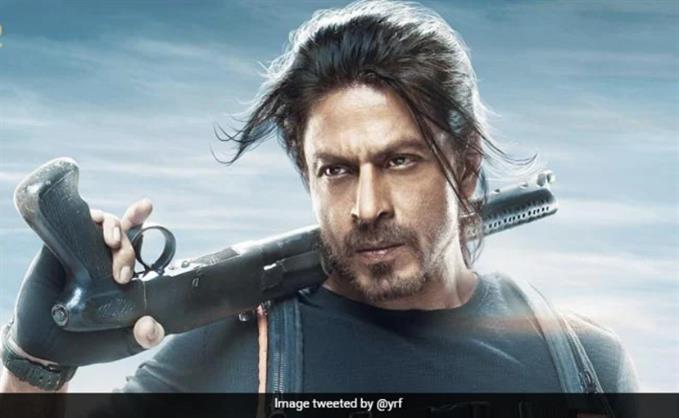 What : Pathaan – the emperor strikes back…Shah Rukh Khan gives his fans and action buffs a memorable treat with this high octane spy action drama by Siddharth Anand which is a solid mass appealing action bonanza with interesting twist and a huge surprise

YRF’s spy universe gets the extension in the entry of the King Of Romance Shah Rukh Khan as Pathaan after Salman Khan as Tiger & Hrithik Roshan as Kabir.

Pathaan is an ex army man turned special undercover agent who is on a mission to thwart the deadly plans of Jim (John Abraham) – also an ex army man.

There is Rubai (Deepika Padukone) a Pakistani ISI agent who also has an agenda.

He back stories of Pathaan, Jim and Rubai are told in between those high octane action sequences.

And there is this brother ‘bhai’ (yes you guessed it right coming at a crucial moments to please his fandom as well.

Toh double maaza aur ek ticket ka daam. Pls don’t ask about logic, its goes for a toss and enjoy the magic – the charisma of SRK.

Shah Rukh Khan is coming back on big screen after four years, it generates huge expectations and such happenings on silver screen is not just a movie watching exercise it’s an event, an experience.

The complain that Bollywood is failing to deliver a mass appealing entertainer gets solved with this Siddharth Anand directed spy action bonanza.

Pathaan has style, substance, swag of a super star like Shah Rukh Khan, the hotness of Deepika Padukone and a strong villain in John Abraham.

Designed to please the masses, Pathaan plays to the gallery and is a joyous moment for fans.

The 57 year old Shah Rukh Khan hailed as the King Of Romance looks ultra cool, dapper in those floral shirts and that chiseled body making the young stars who are half his age envy.

Living up to the hype, Pathaan is a spy action drama and an super hero movie rolled in one. Pathaan is complete OTT its mostly a fan service with breathtaking stunts, mind blowing action, pulse rising chase sequences on cars, bikes, crowd pleasing dialogue baazi, a super hot female femme fatale, with the tadka of patriotism, style and slick narration.

The story by Siddharth Anand has enough twists and turns with unexpected surprises that keep you hooked right from the word go.

Shah Rukh Khan excels. He rules, SRK ensures his fans that the four year wait don,t go waste. His looks, swag, action, body language, witty on liners at times will make his fans (very happy) and audience in general happy. SRK stardom is at stake, Pathaan will boost King Khan’s prospects in gaining his crown back.

John Abraham is terrific. At times John overpowers SRK in the action sequences and his poker face dialogue delivery with that trade mark smile fits perfectly in his role as Jim. John Abraham is outstanding.

Dimple Kapadia is marvelous as SRK’s boss and has a solid moment of her own.

Ashutosh Rana is fantastic as usual in a brief but important role.

And last but not the least, the ‘bhai’ factor… yes

Salman Khan comes and the movie enters another level as far as mainstream mass masala action entertainer is concerned. The audiences in single screen especially are going to get crazy by finding this Karan Arjun jodi together on screen.

The back story of Rubai lacks the required byte. The VFX could have been much better. A bit more humour could have created wonders. The chemistry between SRK and Deepika is not that exciting as it should have been. The background is strictly passable.

Pathaan has everything an action buff, a hungry soul of mass masala action drama, an SRk fan and a bollywood mainstream cine lover would have asked for. A deadly SRK, jaw dropping action, a hot Deepika Padukone, a strong villain in John Abraham and yes Tiger, bhai Salman Khan – the reunion of Karan Arjun in this YRF spy universe is enough for your money’s worth. Pura Paisa vasool.

Here is our Pathaan movie review in Hindi