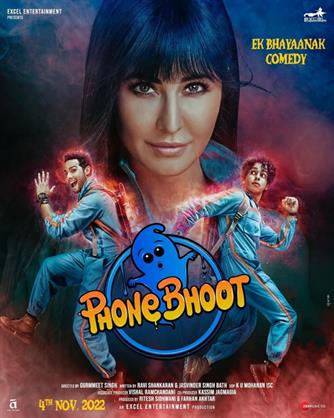 What: Phone Bhoot - It requires a special type of talent to make a film like Phone Bhoot. And I had used this line twice in my career of writing reviews. One for Teen They Bhai and the other for Action Jackson. The film is a glaring example of "how not to make films" and must be treasured as an emporium.

Gurmmeet Singh's Phone Bhoot is excruciatingly silly and puerile. Two loser boys, Gullu and Major, played by Ishan Khatar and Sidhant Chaturvedi are wannabe Ghostbusters but haven't been able to get even one single deal.

Their ghost party on 'Amavas ki raat' has no takers, they are literally penniless with their dads landing slaps on their faces for doing nothing and slam a bill of 5 crores for their upbringing expenses. Enter Raagini (Katrina Kaif) , the ghost with a business idea. She would help them locate the troubled and possessed souls and they would exercise them, ultimately giving 'moksha' to the aatmas.

But why is Raagini doing this? Will the boys buy her plan ? Will it hurt their conscience ?

Well these are some of the questions that would require you to watch the film in order to answer, but I vociferously ask you to stay away from this. Otherwise your nerves will wreck, you are most likely to develop a migraine and you will lose your sanity!

My more pertinent questions - Why did Farhan Akhtar and Ritesh Sidhwani back this script? What made Katrina choose this film? What was Jackie Shroff exactly meant to do?

Phone Booth is a 2 hour 15 minutes of torture induced on those innocuous souls who went to have some clean entertainment in the name of horror and comedy. But the film offers neither chills nor laughs.

It is a self-sabotage endeavour for Katrina, Siddhant and Ishan who struggle hard to elevate the juvenile writing with their bewildering jokes. The jokes, which don't land for most of the time, are as outlandish as their costumes and den.

Katrina is inert all the while. Sporting a wig, she looks disinterested and hence is sort of emoting. I am not sure why the duo - Gullu and Major - find her hot, which she is remotely not! I also feel sad for Sheeba Chaddha who is criminally wasted. She plays a Bengali Chudail, struggling to pronounce 'Moksha'. At one point, Katrina says her, "Hindi Kamzor hai Tumhari?!" How cringy!

I go with 1 star out of 5 for Phone Bhoot. It has disaster written all over it.