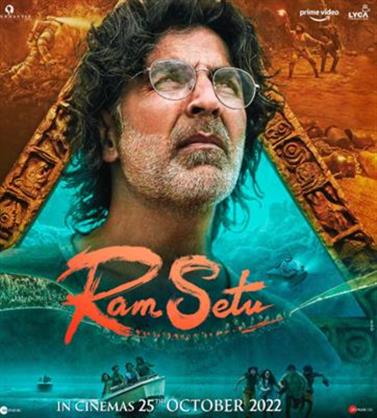 What: Ram Setu - The best thing in the film is the sample rock that is discovered, goes missing and then recovered!

Akshay Kumar starrer Ram Setu is a bargain basement version of National Treasure, a desi but tacky rendition of an adventure hunt in the name of scientific expedition and exploration of truth and masquerades as a courtroom drama in its finale.

Minutes before the verdict of the Supreme Court on the origin of the Ram Setu, Nussratt who plays Akshay's wife applauds him and says, "You are the best lawyer that Lord Ram could ever have got" ! I also quite agree with that. Writer-Director Abhishek Sharma fleshes out his protagonist as a man of many talents- He is an archeologist by profession, a scientist by passion, can even turn into a diligent homemaker but an atheist by beliefs.

The film begins at Afghanistan where Taliban troops demolish a statue of Buddha transforming the archeological endeavor of Aryan (Akshay Kumar) and his team to a full blown action scene. Aryan digs and ploughs out some historical marvels, gets felicitated by the ASI(Archaeological Survey of India) and is promoted to a Joint Director post!

And then it switches gears to the Setu Samadhan Project - to break the bridge as there is no proof to its 'man-made' origin. What further irks the public and fuels their angst is Aryan's report which negates it's creation by Lord Ram during the Ramayana. Because he is a man bound by science and not mythology. Aryan's jugular disrupts the cultural harmony and leads to his suspension for outright blasphemy.

Deeply hurt but still resilient, ge embarks on the scientific exploration to excavate the truth that's lurking 6 kms underneath sea level and this time he is aided by a shilling corp. tycoon( Nassar). Aryan is joined by Sandra (Jacqueline Fernandez) and Gabrielle in the deep water adventure - they call it ' Flying under water' with his robot outfit called Makar, little knowing that they are risking their lives under the death trap hatched by the enemies. Chased by them and the deathly sea storm, they cross the Srilankan border with a saviour( AP, played by Satya Dev) coming to their rescue and helping them in the treasure hunt.

Till intermission point, Ram Setu is reasonably good that resonates with an interesting premise and a well-researched material but soon it derails into a clumsy and puerile affair with its tacky VFX, tackling an unconvincing journey to Trikon Parvat, Sanjeevani booti and even a dwarf crocodile which leads their way to some implausible discoveries. At this stage, Ram Setu feels so convenient.

The finale is cringy and manipulative, snowballing into a facile courtroom drama that feels more like a science vs mythology debate on the existence of our gods and you can observe the displeasure straight in Shweta Kwatra's eyes who battles Akshay on the other side.

Not that the film is unwatchable, it hits the positive notes with Akshay's earnest performances even though the actor is saddled with a sloppy writing that's as inconsistent as his stubble and patchy editing. The female brigade suffer grossly under-etched characterizations -  Jacqueline seems lost most of the time, although her attire is intact in the clumsy  roller-coaster and Nussratt Bharruchha just howls, "Are you OK?".Equally undercooked and underwhelming is Nassar's part.