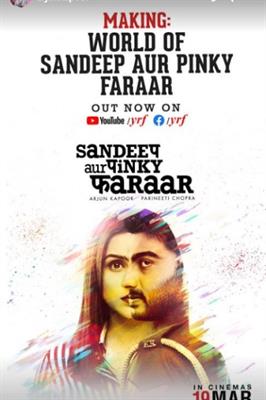 What: Dibakar Banerjee reunites the Ishaqzaade pair Arjun Kapoor and Parineeti Chopra in one of the most masterly executed attack on gender bias & inequality in recent times.

Two different individuals from two different worlds cross paths. Sandeep is actually Sandy Walia (Parineeti Chopra), a top banker – director of Parivartan Bank who can afford a hand purse worth two lakhs. Pinky aka Satinder "Pinky" Dahiya (Arjun Kapoor) is a suspended Haryana cop, who is struggling to get back to his job. Pinky’s boss, Tyagi (Jaideep Ahlawat) sends Pinky on an assignment and a shocking incident force Sandeep Aur Pinky to flee.

The title might give a feeling that things will be conventional that suits the appetite of entertainment hungry souls of Bollywood or say Indian cinema. But it’s a Dibakar Banerjee film so except the unexpected from Dibaker in situations that seem to be ‘normal’ at first glance. Dibakar Banerjee who gave gems like Khosla Ka Ghosla, Oye Lucky! Lucky Oye!, Love Sex Aur Dhokha, Detective Byomkesh Bakshy!, Titli this time collaborates with stand-up comedian Varun Grover to churn this modern day gem on gender bias, economic divide and more.

The movie begins with men in a land cruiser talking about women. And one of the character boosting about a pink shirt he wears and looks handsome. These sexist males are the focus of this movie. Be it the dominating uncle (Raghubir Yadav) of Pithoragarh – a picturesque town in Uttarakhand where Sandep and Pinky take refuge. In one of the scene he says, “ Aunty jeeye ya maare yeh mein decide karoonga”. Neena Gupta plays the Aunty who like many of the women in the world have accepted the dominance of such uncles as their fate as a woman.

The uncle from Pithoragarh, Sandeep’s boss Parichay (Dinker Sharma) from the metropolis share the same mentality to supress women when they try to demand their right or speak up for themselves.

Pinky is the unconventional balance male – rough, tough and raw whenever required but ruled by a gentle vein of understanding within his strong masculine male appearance.

The writing of Dibakar and Varun are filled with layers and they together weave a masterful yarn that smartly uses the word ‘pink’, male machismo and corporate greed to put their point forward.

In the process the economic divide, exploitation, corruption also gets highlighted.

Another highlight of Sandeep Aur Pinky Faraar is the possibility of kindness in cruel situations which keeps alive the flame of hope.

Parineeti Chopra is back in her groove. The Parineeti we all loved is back and how.

Arjun Kapoor – a highlight of Arjun Kapoor’s career. This will be remembered.

Raghubir Yadav as Uncle is exceptional.

Rahul Kumar as Munna – the Salman Khan fan is extraordinary.

Anil Mehta’s cinematography is outstanding. The background score, composed by Dibakar is moody and intoxicating as the movie. Editing by Bakul Matiyani is apt. Production design by Garima Mathur and Aparna Sudis in sync. Costumes by Rohit Chaturvedi are perfect.

Could have been tighter in the second half. Why was this gem not promoted properly is a mystery?

The opening scene and the climax stand out