Shabaash Mithu movie review: The most joyless film about cricket 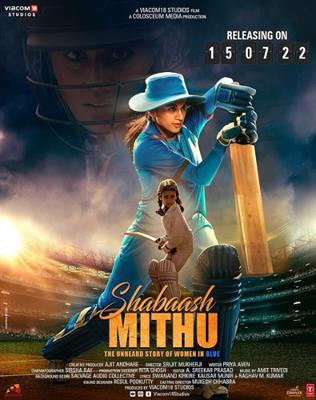 What: When men play cricket, we make movies where everyone in the audience is screaming, ‘Indiyaaa, Indiyaaaa!’

When they make a movie about one of the finest women cricket players of our times, we are forced to put our fingers in our ears because they have Kailash Kher belting out rubbish about chidiya, gauraiya, titlee, desh ki beti…

I expected a paint by numbers sports movie, you know, where an underdog comes out on top and even leads a team. So the coaching, the supporting parents, the sledging among teammates when Mithali Raj first gets selected, but then she shines on the ground and wins hearts because she keeps saying ‘our team played well’. And that’s what we got. I was happy with that. In fact I was one of the few in the audience who laughed when the little girl put stones as fielders and named them after the Bharatanatyam class kids. Loved it, in fact.

Loved the slow morph of the little girl who grows up into a teen and then to Tapsee Pannu. That transition was wonderful. What I did not understand is why Tapsee Pannu played Mithali Raj as if she were struck by the sadness disease. You can count on your fingers the number of times they show her smiling. Chalo, I understand that she needed to concentrate on the game, but it looks like Tapsee Pannu had a gun to her head. She does not smile. Sports are meant to release endorphins. Endorphins make you happy.

Fifty banao toh Tapsee is grim, Century banao toh it looks like ehsaan kiya hai hum par. Eff that I say! If it were the story of boys sneaking out in the middle of a match, they are shown going to a disco or something. Here, the joyless club is looking at stars and talking about pollution!

Despite the saddest sports film, I would like to offer big marks to Mithu's parents, Vijay Raz who plays coach, the very cool Women's Cricket Board 'Madam', and the girls who played Mithu's teammates.

But no marks to whoever wrote the part where a defeated Mithali (who comes back home) has to prove that she's a 'girl' by making dosas, and putting nail polish. The entire theatre groaned in unison to watch Tapsee putting bangles on and removing her sweat band. Who are these people who think women cannot wield the bat if they like nail polish and bangles? Did they forget she learnt to dance as a child? Are they trying to tell us women who play sports forget that they're female, and stop liking feminine things? I call the BS on that! Are they living under rocks because they have not seen Megan Rapinoe? Serena Williams? They are not just sports icons, but fashion icons as well, plus they’re marvelous, inspiring human beings. Why would I take my daughter to watch this dour, miserable version of a cricketing icon who made the Indian Women’s Cricket team a force majeure? Jhoolan Goswami, Smriti Mandhana, Harmanpreet Kaur are such bright stars of cricket I am sure they did not want to be portrayed as sad, miserable women who ‘wanted to become a name’.

How did they manage to take something so inspiring and turn it into ‘desh ki beti, desh ki mitti’ crap?!

The story of the little girls playing cricket is brilliantly done. But the story falls apart with India training camp and the rest is as Tapsee says, ‘Koi professional coach hona chaahiye tha’ to take the story forward.

The best part of a sports film is the climax, the final match. So what if they lost the final. Yaar, make me feel the game! I don’t want the stupid ‘Sattar minute hain tumhare paas speech’ Shah Rukh Khan has done and dusted that inspiring speech for all sports movies for ever. Kuch naya socho yaar! But then it just gets worse: they bring in the cheapest cut paste artist they could find (or they just did not know how to do this) to insert Tapsee and the other girls into the real matches. Patchwork quilts done by illiterate village aunties are seamless. It’s the World Cup, and I’m wondering where the fast forward button is! And Tapsee Pannu has not smiled. Neither has anyone else. Netflix has chosen this sad film and you will have the option to show the Serena Williams documentary to inspire your daughters. Because no girl child should see this awful film where the option to not play cricket is to make dosas. I have never come away from a sports film so disheartened.