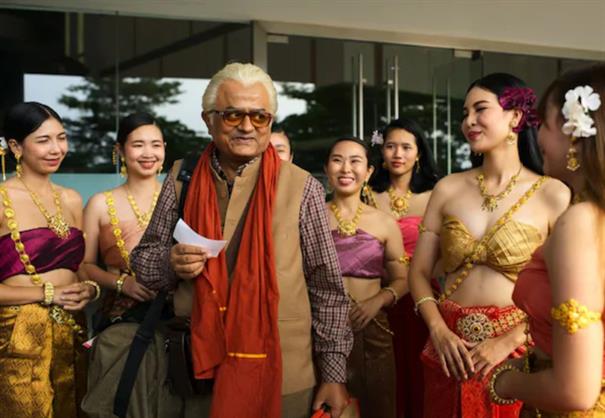 What: Thai Massage - Despite a promising premise, the film remains mired in tacky gimmicks

‘Mummy-Papa also do it’ is a premise handled well in the Neena Gupta - Gajraj Rao film Badhai Ho. This film too could have been a wonderful, delicate sequel to the genre, but the ‘award winning director’ - Mangesh Hadawale uses a butcher knife to mutilate his story for cheap laughs.

Gajraj Rao plays the all round good guy, an amiable old gent, a retired typist who teaches typewriter art to students. Babuji to two daughters and a son. Both daughters married with kids. They are all visiting Babuji in Ujjain, to celebrate his 70th birthday.

But the sons and the son-in-law discover by accident that Babuji has a passport with a visa to Thailand, and in the passport is his picture with a blonde. Bas phir kya! It’s not just swargeeya mataji whose photo has been shattered, Babuji’s image as an all round good guy is gone too.

Of course Babuji makes this sad sack face and tells all. Yes, he did sneak away from family to Bangkok because he needed to ‘Boom-boom’ one last time before he’s too old.

As you hear Babuji explain how he hated the experience of the wilting of his once proud rose. You silently face palm. Will you ever accept roses for Valentine’s day again? Anyway, the ‘wilting’ makes him suicidal and he meets a chap called Santulan’.

Santulan seems to have no job (he barely works at the hair salon) but to prank people because he says, ‘He has no TV’. He takes the sweet old Babuji to a ‘pehelwan’ who is so virile he has had a baby at 80. The old man says things like ‘Talwar mein jung lagi hai’ and sure enough, trusting Babuji begins to eat raw onions and starts working out to get his rusty blade working. Divyendu and his no good drunken gang call Babuji for cheap chuckles.

Actor Divyendu plays Santulan, and you wonder why this actor chooses to play the jerk in every film, whether he’s swearing Liquid in Pyaar Ka Punchnama or the useless Munna in Mirzapur. Thanks to a prank, Babuji’s wilting rose is not wilting any more. Of course Divyendu suggests that he ‘use’ this new found virility… Of course Babuji is well known in small town Ujjain and even his daughter spots him emerging from a cheap love motel…

What will happen to Babuji now? The prankster suggests Babuji go to Thailand, because everyone goes to Thailand for ‘Boom Boom’.

If you think this movie cannot sink any lower, you’d be wrong. it does. It’s got everything that is awful in a sex comedy. Old man gets dropped off at a cultural dance program instead of what he’s expecting. When he makes it to the nightclub scene, he’s too wide-eyed to notice he’s attracted to a lady-boy. When he pays a woman to come to his room, he falls asleep… This goes on and on until you have to remind yourself that grinding your teeth so hard is bad for you.

Did the filmmakers think that no person in Thailand speaks English? That a retired bank typist does not know English? That showing the utter juvenile jokes on old men who still want to ‘do it’ will pull in crowds in the theatres? Come on! We have seen Ashok Kumar and co play lusty men in sex comedies like Shaukeen. We’ve seen Hollywood comedies about lusty old men dying during their escapades and their grown up kids horrified to receive calls from brothel heads who remark, ‘At least he died happy’. And when you watched those films, you did not come away feeling like you needed a shower. This film? Just a never-ending groan fest.

And the worst part? The story reaches a point where you think it might redeem itself. The old man meets a ‘Russian’ girl - Alina Zasobina who is a travel blogger and she sort of opens his mind. Experience Thailand differently. And he does. His joy at just exploring the countryside with the girl is amazing. But then again the filmmaker spoils it all.

He’s morose because he hasn’t ‘boom boomed’ with anyone. Oh come on! So the Russian offers him a pity-f*** and we pity the people who insist that this film be unleashed upon the general public.