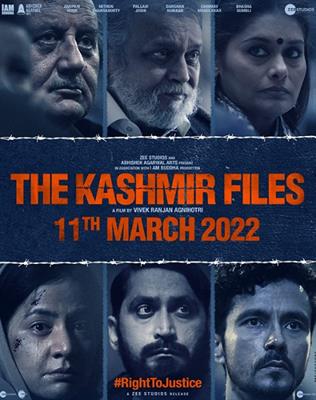 What: Vivek Agnihotri in his courageous, most powerfully relevant & finest work till date brings one of India’s biggest shame on humanity on screen. The Kashmir Files opens up the wounds of the cruelest dance of devil on Kashmiri Pandits – the genocide (1990) and in that opening of the bandage, we see the rotten ugly wounds of barbaric and inhuman atrocities on innocence Kashmiri Hindus – Kashmiri Pandit’s which scream about the unforgiving failure of the system – the government at that time, the media in its silence. Echoing the indifference in the idea and understanding of intolerance with an echo that finds chorus in every pain, scream & wound.

The valley is under the control of the militants as slogans like Ralive, Tsalive, or Galive (Convert to Islam, Leave the place or Perish) is getting delivered from the mosques all over.

The militants are hunting for Kashmiri Pandits and eliminating them. Pushkar Nath’s family is the first generation victim.

The movie travels back to forth and after decades the grandson of Pushkar Nath the young Krishna Pandit (Darshan Kumar) contesting the president election at that controversial Delhi university name changed over here.

Pushkar Nath like many Kashmiri Pandits dies with the hope of returning back to his homeland land – Kashmir and abolishment of Article 370.

The third generation Krishna Pandit (Darshan Kumar) has no idea about the truth and the shocking incident that happened with his parents.

Krishna Pandit is rather overwhelmed by the so called liberal and that pseudo intellectual narrative of Kashmir and India given by Prof. Radhika Menon (Pallavi Joshi).

The horrific inhuman incidents happened to his family and his community of Kashmiri Pandits shakes him completely but he is unable to accept the truth as his mind has been brainwashed by the narratives of the pseudo secular mindset like Prof. Radhika Menon that gets support from the sold media – the ‘presstitutes’.

Caught between the ‘war of narratives’ how Krishna Pandit –the Kashmiri Pandit of today’s post Nehruvian, Gandhi regime comes to terms with the truth of Kashmir and the rich divine culture of the heaven on earth finds the crux of this powerfully relevant cinema that has that rare quality to change the mindset by bringing the naked truth forward.

We all remember the master Steven Spielberg’s master class in movies on genocide – the evergreen classic cult Schindler's List (1993), from March 11, 2022 the true India, a true Indian and a true lover of realistic and sensible cinema will remember The Kashmir Files for its sheer courage and honesty in bringing that devastating truth in front of the public eye.

In my vocabulary as a film reviewer I have tried my best to avoid being political but this time words like presstitutes, pseudo intellectuals, nehruvian, Gandhi era came along with the flow.

I have met Kashmiri Pandit’s in my real life and have heard devastating stories that have shook my soul.

The Kashmiri Files brought back those stories back, it’s so painfully disturbing to find the complete failure of the system during that genocide – exodus of Kashmiri Pandits.

Its infuriating to find that people like Yasin Malik and Syed Ali Shah Geelani were sheltered and supported by the system, what is ‘azadi’ or kya hoti hai Kashmiriyat?.

Why the dance of evil on innocent Kashmiri Hindus in their land by the Pak sponsored extremists is not much spoken. Why was the system so impotent and what was more important for the impotent system at that time?

The account of the trauma of Kashmiri Pandits is spine chilling, writer director Vivek Agnihotri along with his co writer Saurabh M Pandey gives us reasons to think and ponder how can a sick person like Bitta Karate openly confesses of killing Kashmiri Hindus and moves freely. The interview is taken by the same Vishnu Ram (Atul Shrivasta) a friend of Pushkar Nath. What a shame.

Apart from the disgusting failure of the system, the other most significant and much relevant in today’s time is the mention of ‘war of narratives’. We are all witness to this and nowadays its more severe.

The hidden layers of real truth, the history getting buried under this fakeisim and pseudo intellectual propaganda.

Yes, this movie is from the Kashmiri Pandit angle, yes it has its political tones but more importantly it’s a hard core naked truth that has been denied.

No it’s not about forget, forgive move on… why. Why the brutal genocide which didn’t even spared kids followed by an exodus of around reportedly 5 lakh Kashmiri Pandits not such a horrific act of evil in the eyes of pseudo intellectuals, some section of the foreign media.

Anupam Kher gives his best after Saaransh and the Accidental Prime Minister. I leave it up to the readers to judge the best from the three. Such is the quality of this actor a master who delivers another master class.

Darshan Kumar as Krishna Pandit is outstanding; he nails it during the climax.

Pallavi Joshi proves again that she is an actress with such rare grace, spontaneity and ease that she can easily win the connect of the audience instantly.

Prakash Belawadi is in his known element.

Mrinal Kulkarni and others.