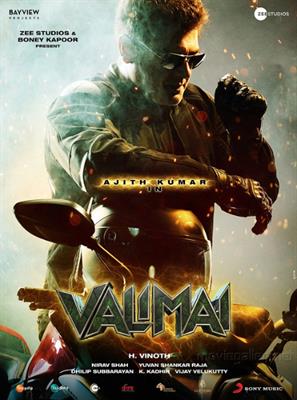 What: Post the demise of Sridevi, Boney Kapoor has been aggressively producing films in Tamil. He has now teamed up with Thala Ajith Kumar for an action drama called Valimai. The film has Huma Qureshi as the female lead and is directed by H Vinoth. Read on to see if the film lives up to all the hype or not.

The film is based in Chennai. A series of crimes like drug peddling, chain snatching, and murders happen. The cops come to know that a dreaded biker gang is behind these crimes. As the cops find it difficult to nab the head of the gang played by Karthikeya, a top cop - Ajith is brought into the scene to find out the mystery. How does this super cop go against all odds and nabs this gang is the basic plot of Valimai.

Valimai banks heavily on the star power of Ajith and he lives to all the expectations. The robberies and how crime unfolds in the city is established in a wonderful manner. The entry of Ajith into the case, action episodes at regular intervals keep the audience engaged.

But the film falls flat in the drama department. There are not many scenes which showcase the hero-villain conflict. The manner in which the family drama is induced into the crime setup is good but it lacks proper depth. More than anything, the scenes that showcase Ajith's brother getting stuck in the case does not have much impact on the story and dilutes the plot.

Director H Vinoth is known for his action blocks and he does a superb job in this department. But as he adds so much unnecessary family drama, the film becomes weak. The audience will enjoy the action blocks when they are in full flow however; the boring drama makes the film dull.

Boney Kapoor has spent a lot of money and that is visible in every action episode. The manner in which the bike chase scenes are choreographed needs a special mention. The dialogues, production design and aesthetics of the police setup look fancy and give the film a good edge.

Talking about the story, Valimai has a basic plot which you might have seen in many films earlier. But the biggest villain of the film is the dull editing. The film has so many boring scenes which should have been chopped to make the action drama crisp.

Camera work used for the action blocks is stunning and give you an instant rush. Telugu dubbing is pretty decent. The writing is quite weak as the film is filled with unnecessary family scenes. Yuvan Shankar Raja's BGM is terrific.

Ajith is super stylish and plays the role of a cop perfectly. He gives his fans so many whistle blowing moments as the action blocks will not only be loved by the fans but the general audience will also enjoy them. As Ajith is known for his bike riding skills, they are showcased in a superb manner. For South Indian film standards, Valimai has the best stunts.

Huma Quresh suits the role of a cop but she is not utilized much and is seen only as a support to Ajith. The main villain played by Karthikeya is okay in his role. Though he tries hard in his character, he is no match to Ajith and looks weak in the end portions of the film. The rest of the supporting cast is filled with new Tamil actors and they are just about okay.

Valimai is a Paisa Vasool film for action lovers and fans of Ajith as he is seen like never before in an action packed avatar. Having said that, the film is lengthy, moves at a slow pace and lacks the drama. The film will fare well in Tamil Nadu but when it comes to other languages, it becomes just an ordinary watch for some good action episodes.