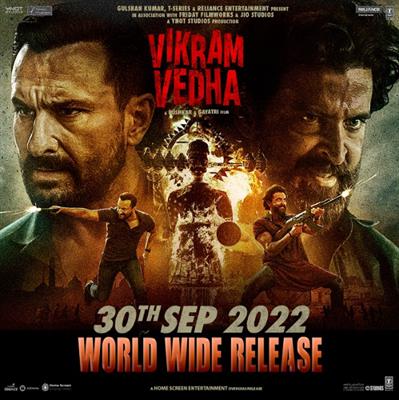 What: Vikram Vedha – citi maar, parda phaad finally a massy action packed dhamaal mere yaar. Pushkar–Gayathri’s Hindi remake starring Hrithik Roshan and Saif Ali Khan of their own 2017 Tamil cult of the same name that starred Madhavan      and Vijay Sethupathi is good news for the entertainment hungry souls of Bollywood which can make them dance with joy.

Remember ‘Baital Pachisi’ –Vetala Panchavimshati ("Twenty-five (tales) of Baital"), a collection of tales and legends within a frame story, from India.

The popular Chandamama comics story – Vikram Betal which got adapted into a television series in 1985 (Vikram aur Betaal) by the makers of Ramayana – the legendary Sagars.

Pushkar Gayatri’s Vikram Vedha is based on the same template.

Vikram (Saif Ali Khan) is an honest police officer who is clear cut in what is good and what is bad. There is no grey in between.

On meeting Vedha – the bad, the good – Vikram gets confronted on his believes.

A war of ideology and a battle of understanding of what is truth and what is bad in reality opens up a web of complexities for Vikram.

Vedha would ask a question and just like the stories those who have read in Chandamama or seen in the serial, creating a doubt in the mind of Vikram and disappear.

The cat and mouse game now gets more and more interesting, dangerous and…

A true blue mass action packed entertainer in Hindi after a gap. Pushkar–Gayathri’s neo-noir action thriller starring Saif Ali Khan and Hrithik Roshan in lead is a case of superb balancing of a mass entertainer with a meaning making it a perfect cross cover escapist delight. An example of great casting and a manual in how to make a ‘safe’, workable, profitable and a pious remake.

The clash of personalities/ideologies over the good and bad is weaved through a simple cat and mouse chor – police ( cop and thief) saga. Blended with the popular childhood favorite Vikram Betal fairy tale giving us a cinema that has an engaging and thoroughly gripping story arc and characters with a convincing and layered graph.

A straight forward Vikram – Saif Ali Khan who believes he is killing the criminals who deserved to be punished and has a clear cut picture of what is good and what is bad.

On the other hand, the dreaded out law Vedha - Hrithik Roshan has shades which confronts Vikram and whenever Vikram gets hold of Vedha, Vedha comes up with an interesting story that narrows the gap between the good and the bad.

It’s a win win situation as the writer director duo  Pushkar–Gayathri brilliantly establish the chemistry between Vikrama and Vedha.

The dialogues by Manoj Muntashir & Benazir Ali Fida add up to the pleasure and at times are philosophical as well.

The narration style of Pushkar–Gayathri is fascinating right from the word go, getting intense and soft whenever required and intriguing at will. Marvelous storytelling, from fantasy to de nior to a crime drama travelling all genres and having fun.

Hrithik is awesome. In that rugged unkempt look nails it as the eccentric Vedha is going to steal the audience hearts.

Saif Ali Khan holds on solidly and is equally at par with Vedha. Saif is suave firm footed brilliantly as Vikram.

Radhika Apte as Priya Vikram’s wife is fantastic and has an important part to play.

Yogita Bihani as Chanda – Shatak’s childhood friend has her moments.

Sharib Hashmi as Babloo – the trusted aide of Vedha is superb and has a good meaty role.

Technically a well crafted movie. PS Vinod’s camerawork is excellent. Action by Parvez Shaikh and team is raw and edgy. And that background by Sam CS – Uff what an impact.

From those who have seen the original complains about making almost same to same remake will arise. Things do happen as per the maker’s convenience.

Vikram Vedha is a citi maar, paisa vasool fun at theatres. If you love mass oriented entertainers then this Hrithik Roshan and Saif Ali Khan starrer is a mast must watch. Going with a deserving four stars.