3 Shyaane" releasing on 27th May all over 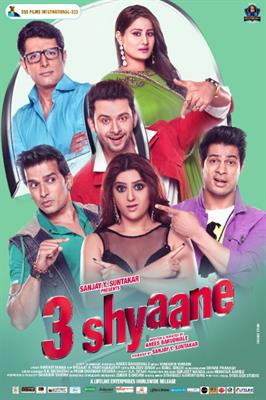 Producer Sanjay Y Suntakar's maiden venture "3 Shyaane" is all set to release on 27th May in cinema halls all over. Produced under the banner of S S S Films International-333, the film is based on the concept of A A Desai and it's written and directed by Anees Barudwale.
The film stars Dev Sharma, Anupriya Laxmi Katoch, Nishant Tanwar, Aarti Gupta, Kunal Singh Rajput, Harshita Kashyap with Mukesh Khanna, Zarina Wahab, Priyanshu Chatterji, Arjumman Mughal, Tiku Talsania, Rakesh Bedi, Asrani, Vrajesh Hirjee, Gauri Wankhede,  baby Pakhi, Girish Sachdeva, Abhishek Sharma and Himani Shivpuri. Two item songs are picturised on Heena Panchal and Amruta Mandvikar.
The film has lyrics by Vikram Tanha, music by Vikram N Vikram, cinematography by Bharat R Parthsarthi, editing by Rajiv Singh, choreography by Chinni Prakash, art by Sunil Singh and sound designing by Sudhanshu Srivastava are the other major credits of the film of which Amarjeet is project designer and Surjeet Nanda is production manager.
This is producer Sanjay Y Suntakar's first film and it was his desire to make a film which should have entertainment value and social message as well. The film has the story of three youngsters who want to become rich overnight and to fulfill their desired dream they take wrong path for success. Later how they have to pay the price for their misdeeds crux the story of the film.
Director Anees Barudwale hails from south and he is well known writer too. He strongly believes that a film with comedy touch and social message is always liked by the audience and his this film has the perfect blend of both. His this film has an element of suspense too to make it more entertaining.
The songs of the film are gaining popularity day by day and now the film too is coming to win the hearts of people.
Tags : 3 Shyaane