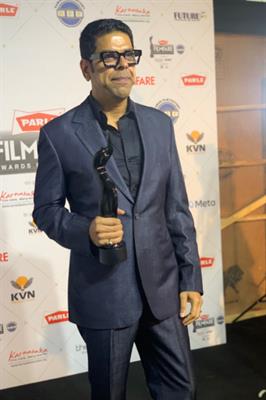 Actor Murli Sharma received the 67th Filmfare Award (South) for Best Supporting Role in Telugu Blockbuster Ala Vaikunthapurramuloo. The film was directed by Trivikram Srinivas and stars Allu Arjun and Pooja Hegde. In the film, Murli played the role of the father of Allu Arjun and he garnered a lot of love and appreciation for his role.
The actor expressed his gratitude and said, “It took 32 years for this dream to come true. I still wonder how I managed to come so far and how I had this kind of stubbornness, intransigence and indefatigibilty. I am extremely humbled, honored, and grateful to Filmfare, my Director Trivikram Srinivas, and my hero Allu Arjun and my producers. I had a great time playing the character of ‘Valmiki’ and it wouldn’t have been possible without Trivikram Sir."
The actor was last seen in Pan-India Blockbuster God Father headlined by Superstar Chiranjeevi. In the film Murli Sharma plays the role of a scheming politician who believes he’s the next candidate for the chair of Chief Minister. Speaking about his experience working with Chiranjeevi, he expressed, “It was another dream come true to work with Megastar Chiranjeevi Sir. I am very ecstatic, enraptured and happy about the film doing so well.”
Murli Sharma known for his bankable and versatile acting skills has an exciting lineup of projects in Telugu as well as the Hindi film industry.
Tags : Murli Sharma