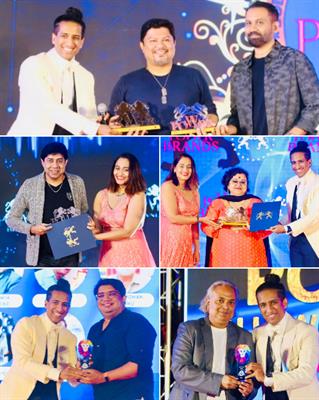 28th June 2022, 7:30 pm the 2022 edition of POWER BRANDS BOLLYWOOD FILM JOURNALISTS AWARDS took place!! The glittering ceremony saw the doyen of acting BOMAN IRANI get the Most Versatile actor award while Divya Dutta took home the Most Versatile Actor female! Sourabh Shukla was awarded a special award for outstanding contribution in Bollywood.
‘83 took home 6 of the Roaring Lions including critics choice Best Film, Sardar Udham and Pushpa took home 5 Roaring Lions including Best Director for Soojit Sarkar. The Best Film along with Four Roaring Lions went to Shershaah.
The event also witnessed the launch of Dr. Arindam Chaudhuri’s latest book – THE TIGER ROARS. The book was unveiled by Boman Irani and Dr. Ritesh Malik of Innov8 fame. The Tiger Roars is a fascinating journey of 12 inspiring success stories mirroring the rise of India- stories picked up carefully from the hinterland to the glamour capital of India, from start-ups to old money.
The 2022 Power Brands-Bollywood Film Journalist's Awards results were out! Even bigger than previous editions for the first time ever in India, more than 25 film critics decided the fate of film makers and stars!
Started in 2017, Power Brands Bollywood Film Journalists Awards are now dubbed as the only HONEST AWARDS in the country because:
The Films and stars get awarded by those who master— the film critics. Growing from strength to strength, while the first edition in 2017 had 17 Film Journalists giving their votes, the 2022 edition has more than 25 of the leading film journalists of this country do an OPEN BALLOT VOTING for all categories and disclose whom they voted for online TWO WEEKS before the award ceremony. Each years results and who voted for whom is visible for everyone to see and results are there for everyone to tabulate themselves— making PB- BFJA the most TRANSPARENT awards ever.
Awards are given irrespective of the winners presence as they are declared a fortnight in advance at least.
There are no nominations and journalists are free to give any one their vote amongst the films released last year.
Basically it's the only credible awards in the country and for the same it has garnered huge appreciation, though still only in its 6th year.