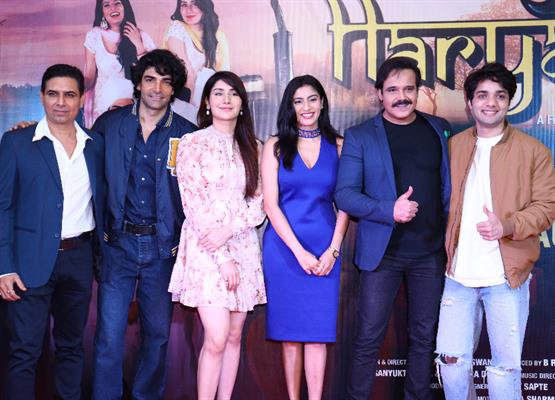 The upcoming Hindi film Haryana’s trailer has been launched in Mumbai. Actor turned Director  Sandeep Baswana ,  Yash Tonk, Ashlesha Savant, Robbie Marih, Monica Sharma and Aakarshan Singh were present at the launch.
Haryana is a story of 3 brothers. Mahender is the eldest  brother,Jaibeer, the second brother, studies in Hisar. Jugnu is the youngest one who is spoiled with the love and comforts of a normal 20 year old. All 3 brothers fall in love and that’s the foundation through which the story unfolds. Jugnu is a movie buff.
That’s his passion and only love. He’s happy living in the village with his 3 best friends lazing and frolicking through life as long as he gets to watch Hindi movies. On one such day for the first time when he watches an Alia Bhatt movie, his innocent heart falls in love with Alia Bhatt. From then onwards, the story takes twist and turns and how Mahender does everything to protect and give utmost importance to his brother’s feelings.
At the trailer launch the director Sandeep Baswana quoted that for authenticity it was extremely crucial to justify true love of an innocent boy.  The team had to wait and follow all the protocols required for the same . Haryana is a romantic comedy, yet it also shows the brotherly bonding and love between the brothers . It’s a sweet , romantic comedy . The cast and crew hope the audience will also give love and support to the film.
"Haryana’ is a romantic comedy produced by B. Raja & Sandeep Baswana under the banner Raja Baswana Films. Sandeep Baswana is  the writer, director and Lyricist. Sanyukta Kaza and Jitendra Dongare have edited the film. The Background Score is given by Guru Dhanoa & Mohit Pathak. Mohit Pathak is also the music director of the film. and music production is done by Guru Dhanoa. Swapnaneel Jayakar is the Creative Producer. Santosh Jha is the executive producer .

Bhanu Prakash Jha is the associate Director. Renuka Kadiyan is the costume designer .Late Johnny Lal is the cinematographer. Visual Promotion is done by Satya Sharma, third Eye studios Mumbai . Digital marketing for music is done by Eyp_digital .  The film has been shot in Haryana and Mumbai and is all set to release on 5th August,2022.