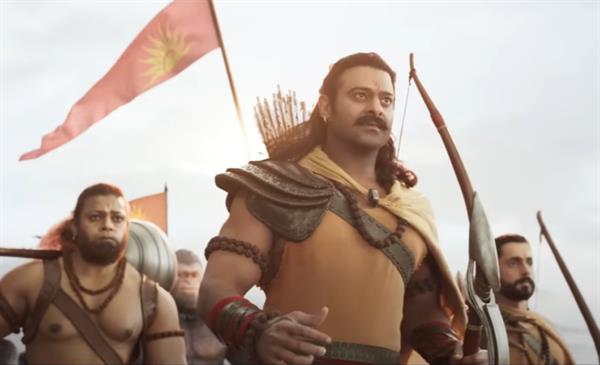 The internet flew into a frenzy shortly after the Adipurush teaser was unveiled in Ayodhya on October 2. The trailer for the movie had over 72 million views in a little more than 24 hours, making it the most-watched in recent memory.
The appearance of the figures, who range from Ravana to Lord Hanuman, has drawn a lot of criticism. The story of the movie is based on the Ramayana, which states that king Ram of Ayodhya travelled to the island of Lanka with the aid of Hanuman’s army in order to recover his wife Sita, who had been kidnapped by Ravana, the ruler of Lanka, 7,000 years before.
The historical drama boasts a star-studded ensemble that includes actors like Prabhas and Saif Ali Khan, and it is predicted to have the highest budget of all the movies released in 2023. It means that the remuneration of the cast must be staggering.

South superstar Prabhas, who will play Lord Ram in the movie, has outbid everyone in terms of cost. According to multiple media reports, Prabhas reportedly got a staggering sum of Rs. 120 crores for the part of Ram.

Saif Ali Khan, who was recently seen in “Vikram Vedha” and charmed everyone with his portrayal of a police officer, is now going to be different in Adipurush. He will portray the evil king of Lanka, Ravana, in the upcoming movie. For his part, he charged Rs. 12 crore.
Kriti Sanon will be paired with Prabhas after starring in the acclaimed and award-winning movie Mimi. She will play the part of Sita, the wife of Lord Ram. She is charging Rs. 3 crores for this movie, according to sources in the media.
Tags : Adipurush Prabhas saif ali khan Kriti Sanon